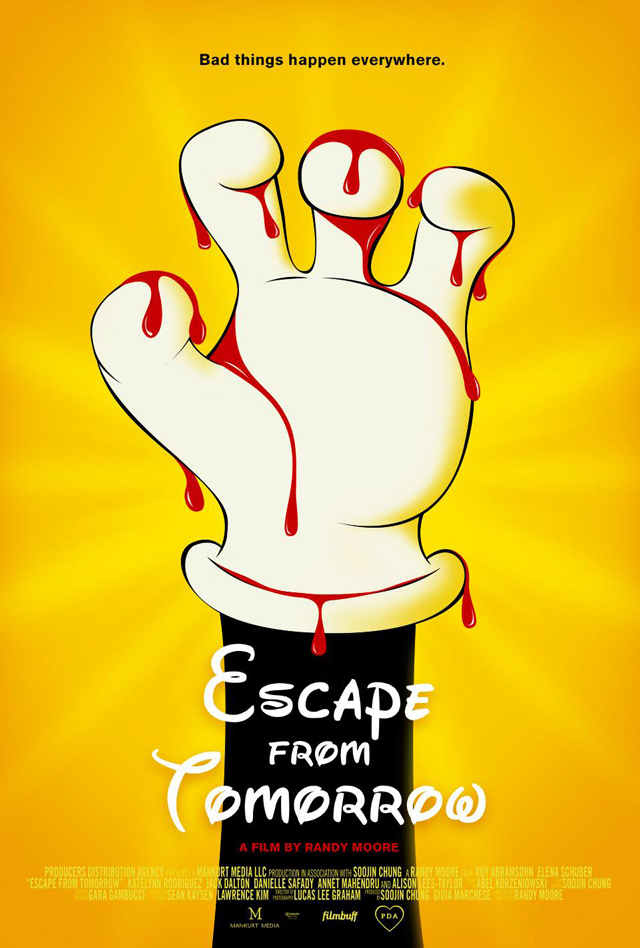 Escape From Tomorrow is an unauthorized indie fantasy-horror film shot guerilla style within the Disneyland and Walt Disney World theme parks. Shot in black and white, it’s the debut film of writer and director Randy Moore and stars Roy Abramsohn as a “man having increasingly disturbing experiences and visions during the last day of a family vacation to the Walt Disney World theme park.” The film will be shown in theaters starting on October 11, 2013 and will be simultaneously available through video on-demand and at iTunes.

The most provocative film from the 2013 Sundance Film Festival, ESCAPE FROM TOMORROW should not exist, and yet it does. Like nothing you’ve ever seen, Randy Moore’s directorial debut is a bold and ingenious trip into the happiest place on earth.

An epic battle begins when a middle-aged American husband and father of two learns that he has lost his job. Keeping the news from his nagging wife and wound-up children, he packs up the family and embarks on a full day of park hopping amid enchanted castles and fairytale princesses. Soon, the manufactured mirth of the fantasy land around him begins to haunt his subconscious. An idyllic family vacation quickly unravels into a surrealist nightmare of paranoid visions, bizarre encounters, and an obsessive pursuit of a pair of sexy teenage Parisians. Chillingly shot in black and white, ESCAPE FROM TOMORROW dissects the mythology of artificial perfection while subversively attacking our culture’s obsession with mass entertainment.