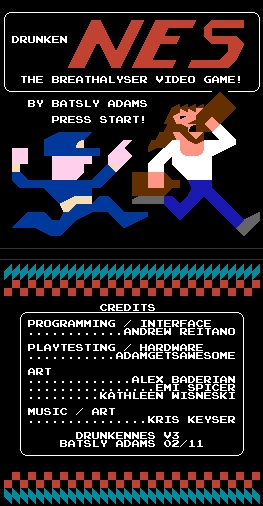 Last weekend, I had a ludicrously fun time playing an iPhone music set at Pulsewave’s monthly show in NYC. The place was packed with an energetic crowd who came to see visual artists and performers using Gameboys, gaming consoles, and mobile devices to create electronic pop music. But one of the show’s surprise highlights was sitting inconspicuously on a small table near the venue’s concession stand…

“DrunkenNES” is a home-brew video game created by Batsly Adams that runs on a classic Nintendo Entertainment System. Players are asked to blow into a breathalyzer, which was cleverly housed in an NES cartridge, then the game would calculate their blood alcohol level and generate their score. The drunker the player, the higher the score. Aside from being conceptually brilliant, the game’s artwork and original soundtrack (composed by Kris Keyser in FamiTracker) really make it shine. I totally fell in love with the whole project when, after my first failed attempt to beat the high score, I was greeted with a screen showing a sewing bear along with the text “You are sew bear”. <3!!!

See more of Batsly’s home-brew NES projects here… and if you ever get the chance to check out a Pulsewave show, do it! Next month‘s show already has a great lineup.