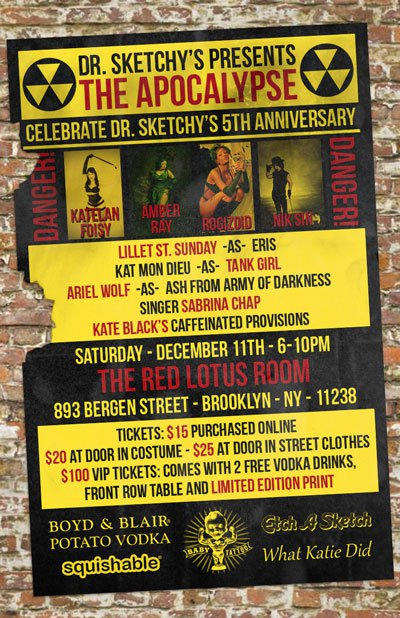 Dr. Sketchy’s Anti-Art School is celebrating its 5th Anniversary on December 11th at The Red Lotus Room in Brooklyn.

It’s the end of the world as we know it, and Dr. Sketchy’s feels fine. On December 11th, Dr. Sketchy’s celebrates its fifth anniversary – and the apocalypse. All of them.

At the Red Lotus Room, our beloved Brooklyn speakeasy, zombie cigarette girls will pose alongside Kali-Ma, road warriors, the Whore of Babylon, and Jesus. Artists can sketch their fellow survivors, pose in the mushroom cloud photobooth, eat Kate Black’s caffeinated provisions, and listen to flame haired singer Kim Boekbinder celebrate the end of the earth.

Congrats to Molly Crabapple and her worldwide network of branches on an amazing 5 years!