CNN became the first round-the-clock news channel in 1980, during the Cold War era. Media mogul Ted Turner, founder of CNN, understood well the threat of nuclear war during that time. While many television stations ended their broadcast day by playing “The Star-Spangled Banner” as a sign-off, Turner knew he only wanted CNN to sign off once: at the end of the world. He had an eerie and somber—yet patriotic—video made for CNN to broadcast on such an occassion, but with a band playing the song “Nearer, My God, to Thee” instead of the national anthem.

In a 1988 interview with The New Yorker, Turner spoke about how the tape was made.

Normally, when a TV station begins & ends the broadcast day, it signs on & off by playing the National Anthem. But with CNN–a 24-hour-a day channel–we would only sign off once & I knew what that would mean. So we got the combined Armed Forces marching bands together–the Army, Navy, Marine & Air Force bands–& took them out to the old CNN headquarters & we had them practice the National Anthem for a videotaping. Then, as things cranked up, I asked if they’d play ‘Nearer My God, to Thee’ to put on videotape just in case the world ever came to an end. That would be the last thing CNN played before we–before we signed off. And, I’ll tell you, those guys in the military bands knew what I was up to.

I keep this tape around because when the world ends it’ll be over before we can say what we wanted to say. Before we can leave any final messages.

Michael Ballaban, a former intern for CNN, shared a view of the warning on CNN’s archives for the video that reads, “HFR [hold for release] till the end of the world confirmed.” 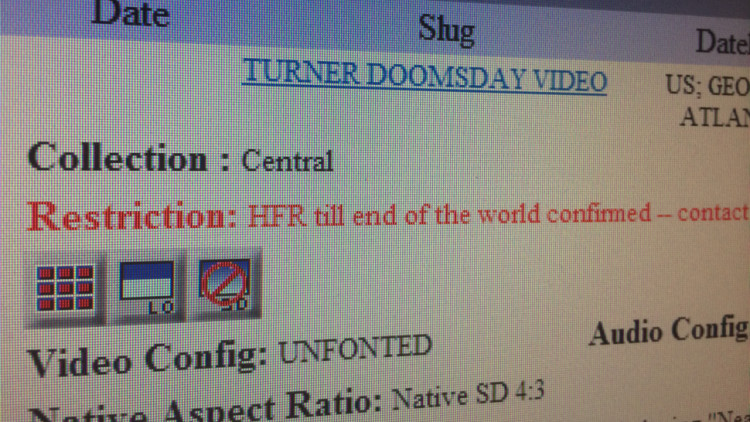