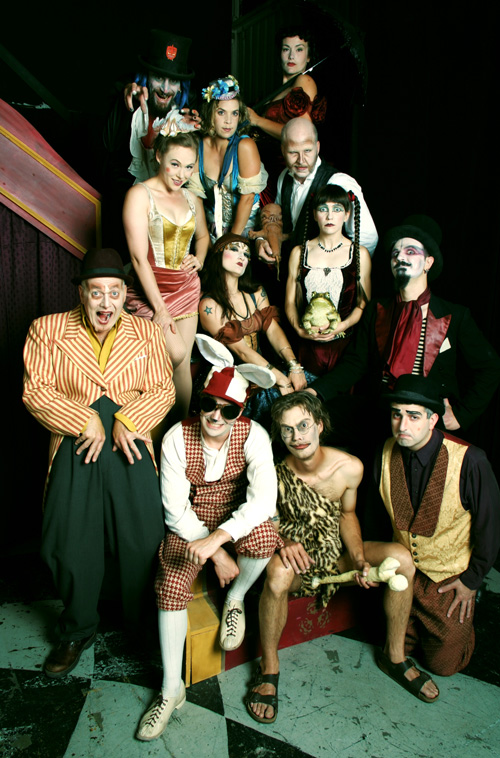 Seattle’s fabulous Circus Contraption is in town as part of their Summer Tour 2007 and they have a series of shows planned this weekend at CELLspace, but according to Chicken John, they were double-booked on Friday and left without a venue, so Chicken has generously offered up his warehouse for their Friday performance.

Space is limited and this will sell out fast, so buy your tickets in advance.

Here’s more from Chicken, including a humorous diatribe about CELLspace:

OK. So years and years ago I met the Circus Contraption when I owned the Odeon. Great people, great show. Just really a pleasure to be around. Me and the director guy Dave became good friends. When things got hard I’d give ’em an earful of charity and when things got bad I’d let ’em know that they were gonna get better. And he me. When my heart was ripped from my chest and smashed on hardwood floor into exaclty 37 billion pieces he reminded me that I need an enemy. Fucker. And the Circus Contraption comes to San Francisco, the city of Art and Innovation, but once a year. They play at CELL Space. Which is a problem. Why? Because CELL Space is a collective. What are some other things that are collectives? Well. Your dryer, for example. Has a collective. A lint collective. And once a week a garbage truck picks up the trash in front of my house. Trash collective. And what about those brass things that old cowboy’s used to spit into? Those are collectives as well. The collective at CELL Space, in it’s infinite wisdom, prudence and effectiveness invited the Circus Contraption to do a weekends’ worth of shows: form Thursday to Sunday… but double booked the Friday night show. They need CELL space for all the trapeze acts and the high ceilings.

So anyway, without bashing CELL for bringing ineptitude to an art form…. they are playing at my house Friday night. It’ll be fun!!! We’ll rig a trapeze and jump up and down and we can curse and tell feminist jokes. Which you can’t do at CELL without triggering a series of meetings that will make you want to move to Sacramento and work in a Jamba Juice.

I have invited the Circus Contraption into my humble home, and you as well. Please, buy tickets in advance as we only have room for a small bunch of you… surely an evening to dismember for all times!!!!!!