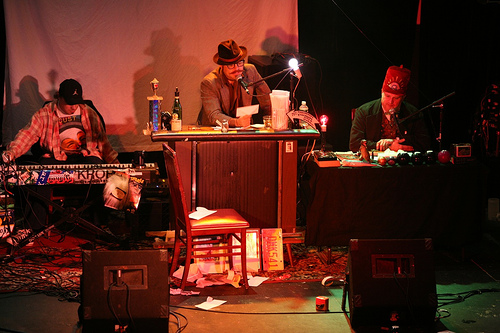 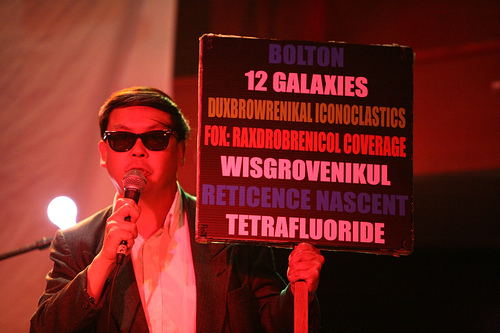 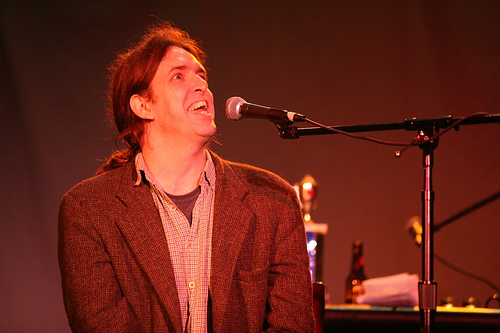 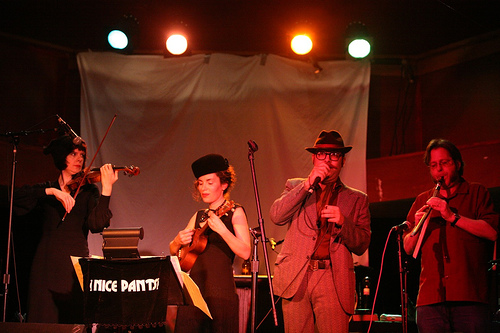 So last night I finally had a chance to catch the Ask Dr. Hal Show at 12 Galaxies, its new location (I was out of town being a conference geek the last two Mondays). It was an extra special show due to the fact that it was Chicken John’s birthday. Happy Birthday Chicken! The show started out featuring Nice Pants with special guest Ralph Carney (plus Hal and Chicken doing songs), followed by Will Franken with some hilarious new material, then the one and only San Francisco legend Frank Chu (the venue’s name, 12 Galaxies, is a tribute to Frank) took the stage to give us an update on his progress, next was Pete Goldie’s space report and then of course the Ask Dr. Hal Show itself, with an appearance by Roky Roulette doing a Colonel Sanders striptease for Chicken. I took a crapload of photos.

Here’s a recap of the show from Dr. Hal’s newsletter:

Like an enraged, bellowing stegosaurus, ASK DR. HAL! charged on to the local scene last week with its THIRD scintillant show at 12 Galaxies, 2565 Mission Street near 22nd, where it has galloped unchecked through the wet and windy month of March. Once again, tables and chairs enough for all were provided by the 12 Galaxies management from storage in the posh club’s cavernous basement, ensuring that no one would have to endure standing on the hard concrete floor for the duration of the lengthy production. First, NICE PANTS opened in style with the musical magnificence of ultra-fetching uberfemmes Linda Robertson and Francine Bennett as advertised, and the piquant participation of roguish Ralph Carney and delectable Kelek Stevenson as not advertised (I certainly would have mentioned these attractions, which I enthusiastically endorse at any time, had Chicken not “sprung” it on me [their presence on the bill] only after I reached the club the night of the show). These dynamic damozels, Francine and Linda on Ukulele and Violin respectively, while captivating Kelek tap-danced, were aided by Ralph on a variety of exotic instruments. During their set, first I, Dr. Howland Owll, provided vocalizations of St. James Infirmary Blues and the enduring Rudy Vallee classic, Goodnight, Sweetheart. Chicken then took the stage with his memorable Elvis Tribute. The inevitable, unintelligible rant from perennial protester Frank Chu followed, preceding comedic genius Will Franken’s triumphant (if unadvertised) return to Ask Dr. Hal! with what one and all concluded was his best performance ever– and with Will, that’s saying a lot. Clearing tears of helpless laughter from their optic exudate- streaming eyes, the cowed crowd attentively attended boffo boffin Pete Goldie’s piquant presentation. After the Ace of Space left the stage, A.D.H. swung into action, celebrating Chicken John’s 38th birthday with vim and verve. Roky Roulette’s chicken-themed routine was a great show-stopper; the brawny ecdysiast covered the stage with frantic, flying feathers as, chicken bucket in hand, he peeled away the accouterments of a certain white-suited Colonel. Beautiful girls in the front row lunged at the drumsticks and thighs suspended tantalizingly just out of their reach, but their teeth snapped on thin air as Roky jerked the tempting viands away at the last moment… and so it went. Too bad if you missed it…

The next and final show at 12 Galaxies is next Monday, March 27th. The opening act will be the incredible Devo lounge band Mongolounge. It will be your last chance to see the Ask Dr. Hal show for a while, so don’t miss it.