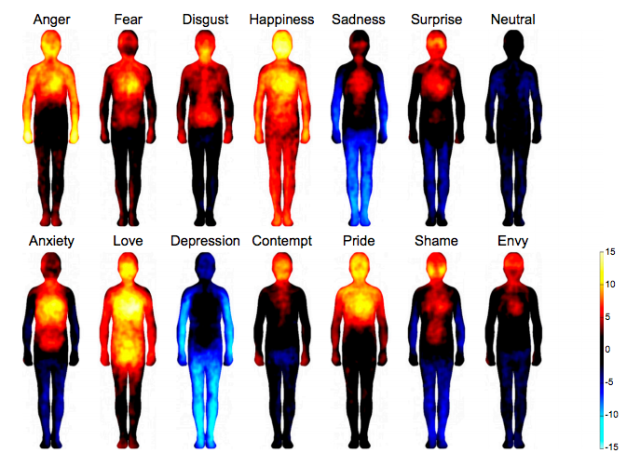 A Finnish study, titled “Bodily Maps of Emotions” conducted in November 2013 and published in the Proceedings of the National Academies of Sciences, posed questions to five different culturally diverse groups and asked the participants to map where they believed emotions were originated within the body. Perhaps the most interesting outcome of this study is how the somatic perception and processing of emotions translate across cultural and language lines.

Emotions are often felt in the body, and somatosensory feedback has been proposed to trigger conscious emotional experiences. Here we reveal maps of bodily sensations associated with different emotions using a unique topographical self-report method. In five experiments, participants (n = 701) were shown two silhouettes of bodies alongside emotional words, stories, movies, or facial expressions. They were asked to color the bodily regions whose activity they felt increasing or decreasing while viewing each stimulus. Different emotions were consistently associated with statistically separable bodily sensation maps across experiments. These maps were concordant across West European and East Asian samples.Statistical classifiers distinguished emotion-specific activation maps accurately, confirming independence of topographies across emotions.We propose that emotions are represented in the somatosensory system as culturally universal categorical somatotopic maps.Perception of these emotion-triggered bodily changes may play a key role in generating consciously felt emotions.

images via Proceedings of the National Academies of Sciences

via Proceedings of the National Academies of Sciences, The Atlantic