Up – down, everywhere you go – there they are, always underfoot. It’s a bridge between here and there, we use them every day, never think about them – unless we trip over them.

Steps, my friend, I’m talking steps, the great connector between the ground and everything above it and below it. Old or new, stone or steel, it’s the steps that get us where we have to go. But steps are not only for walking, but for sitting as well.

An age-old idea butt polished to perfection with a certain finesse in New York City, the art of sitting within reason (not always practical though) where ever you want, but never, never on a bench. Curbs, sidewalks, store window fronts, fountain rims are all fair game for taking and making phone calls and contemplating your navel, but its the steps that make the day. A place to rest, have a phone chat, drink a beer, and most of all, hang and just watch the world go by.

Step seats – now that’s a thought, what have we begot in New York City, a place where most traditions have a heritage that go back forever in time…. For starters, let’s not forgot that age-old butt softener, New York City Brownstone stoops, attached to the front of its Brownstown Buildings marching from sidewalk to first floor entree, and great place to park one’s butt. New Yorkers have been doing that forever, hang’n on the stoops with the neighbors and friends knocking back a few beers, and engaged in that most import of social discourses, gossiping about who did what to who. Of course in winter it’s a different story, going up and down the stoop, sometimes slipping or sliding, and once again planting your butt on said stairs, but not the way you wanted. 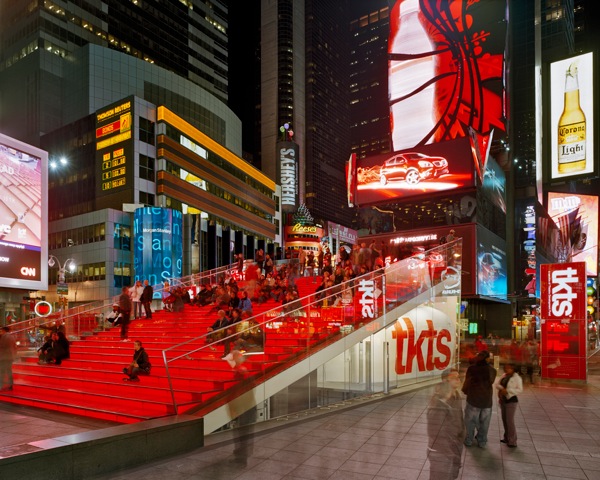 Dorothy had her red slippers, New York has its Red Stairs of Times Square. A viewing gallery for tourists to take in the air and people watch amidst the glitter and glow of all the Times Square frenetic electronic advertising. The Red Stairs, the top of the TKTS Broadway ticket booth (designed by Perkins Eastman), is unusual in that its made completely of red illuminated translucent glass and offers a perfect panoramic viewing point of the surrounding Times Square and if you sit there long enough, to watch almost a million people a day (count ’em if you don’t believe me) pass through it. For professional bench warmers, truly The Crossroads of the World. Moving towards Lower Manhattan in the meat market area, we have New York City’s latest park/playground, The High Line, (designed by New York-based practices James Corner Field Operations and Diller Scofidio + Renfro), an elevated pedestrian concrete walkway enriched with as much flora and flowers that could be seeded into its park-like ground. The High Line is also the first ‘over-the-street’ linear park with a continuous promenade in the United States. If you’re in a walk-a-thon through the park, you might want a time out to sit and rest for a few minutes.

While there are benches everywhere along its elevated pathway, the definite prized sitting area for resting your bod and watching the city go by is the 10th Avenue Square. For the lucky few who get to sit there, it offers a stadium seating -like observation area with a multi-layered space that is actually a sloped ramp that goes all the way to the bottom level in a series of wide zig-zag turns. In a great architectural mash up, the ramp also is framed by a series of ‘benches,’ which invites seating anywhere you want. At the end of the ramp is an observation wall with a series of windows facing out onto 10th Avenue at W 17th Street. From its purpose built space, it’s like being in a ‘sky box’ at a sports stadium whose sport is people watching. Quote the Friends of the High Line: “it all has the feel of an amphitheatre where “The Show” is traffic traveling up and down 10th avenue.” 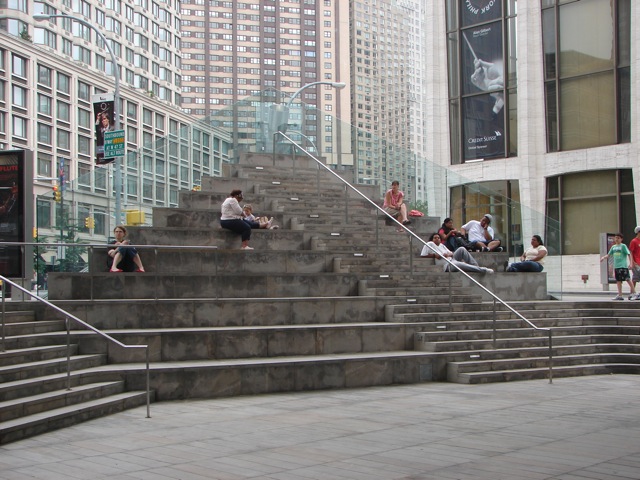 Now we’re coming up on my favorite “steps,” the Broadway Plaza on Broadway and 65th Street is a small smidgen of steps literally wedged up in front (side?) of Alice Tully Hall. What I love about these steps is that they go “nowhere.” With a steep incline, they have a stadium seating feeling facing the ground floor glass wall of its building frontage. It’s a perfect outdoor spot ignored by almost everyone passing by, except’n of course for the few persons sitting on them.

An for those involved in perfecting their performing skills Broadway Plaza provides a perfect opportunity to perform (rehearse?) in front of a ready made audience all over the plaza steps and waiting for that seridipous moment of free outdoor music to serenade them while engaged with their smart phone chats. New York Public Library, world famous as a library (second largest public library in the United States, behind only the Library of Congress) and in god knows how many films, nothing beats sitting on the steps with a good book and reading between the lions (tip of the hat to Patience and Fortitude), the world-renowned pair of marble lions that stand proudly before the majestic Beaux-Arts book building.

Stair Seats Not To Sit On

We have at least two definite no-nose for butt resting in the wide open, not-so public spaces of NYC. The stairs at the 53rd Street and Lexington Avenue subway stop, noted as one of the longest lengths of uninterrupted staircase connecting to a subway platform. It’s a busy stop especially during rush hours (but then aren’t they all), so as for sitting on those steps, in one word: don’t.

The other would be during the Empire State Building Run To The Top event. That’s 86 floors equaling about 1,576 steps to run up. If some one is sitting on those steps during that event, it was an accident that bumped them down. Annd a great inspiration to get up as fast as possible before being stampeded upon.