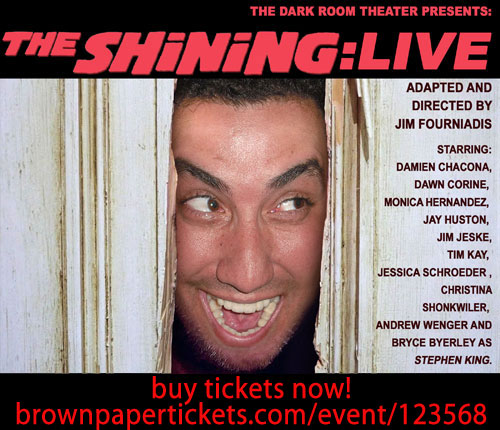 The folks at San Francisco’s Dark Room Theater keep a steady parade of pop culture parody on offer including the weekly movie mockery series Bad Movie Night, an ongoing lineup of local stand-up and sketch comedy, and their original productions of movie and television favorites re-imagined live on stage, like The Twilight Zone and Star Wars. Scott has shot a lot of photos of Dark Room shows. And, full disclosure, I’ve performed in many of them.

Every October, be-fitting the season, there’s usually something spooky or murderous on The Dark Room stage. Past October productions have included Creepshow, a rock opera version of The Wicker Man, Young Frankenstein, and, holy confluence of costumes(!), the 60’s-era Batman TV show.

This year they are en-staging Stanley Kubrick’s film The Shining with an eye toward re-connecting it to its original–the novel by Stephen King. King was famously displeased with Kubrick’s rendering of his story. The Dark Room becomes the instrument of King’s revenge, and brings the author to the stage to make his displeasure known. Wikipedia has a handy rundown of differences between film and novel.

The show runs at The Dark Room Fridays and Saturdays at 8pm from October 1 – 23, 2010. It features a stellar cast that includes the stars of their recent productions of Life of Brian and Caddyshack amongst others. Tickets are on sale now.