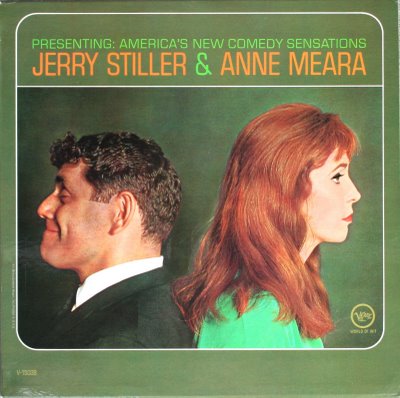 These days Jerry Stiller is best known for playing Frank Costanza on Seinfeld (and following that with a similar supporting role on The King of Queens). Together he and Anne Meara, his wife of 57 years, have also indelibly impacted present-day comedy by co-producing comedian/actor/director Ben Stiller. Amongst a lot of work in film and on TV, Meara also co-starred in Archie Bunker’s Place and later had a recurring role on Sex and the City.

But in the 1960s Stiller and Meara were amongst the most popular comedy acts in the country, with numerous appearances on The Ed Sullivan show. They both came out of the Second City comedy program in its earliest days and, like their friends Nichols & May (who I covered here previously), their comedy is driven by improvisation (as well as the obvious and dynamic contrast between a tall red-haired Irish woman and a diminutive Jewish man).

Now in their 80s the couple have made a bit of a comeback as a duo. Last year they launched an online-only series of short videos called Stiller and Meara. Again their incredible improv skills serve them well.

They are also on Twitter and were presenters at this year’s Shorty Awards for excellence in Twittering. There’s an interview with them the night of the ceremony on YouTube. For more on Stiller and Meara, check out the public radio show Comedy College hosted by Steve Martin for a great feature with a nice selection of their classic material (it’s audio only, and one of many episodes on legendary comics).

This is part of an occasional series on comedy history, which includes previous posts on the early work of George Carlin, Guido Sarducci, Steve Martin, Sarah Silverman, David Letterman, Lenny Bruce, and Jerry Seinfeld amongst others.