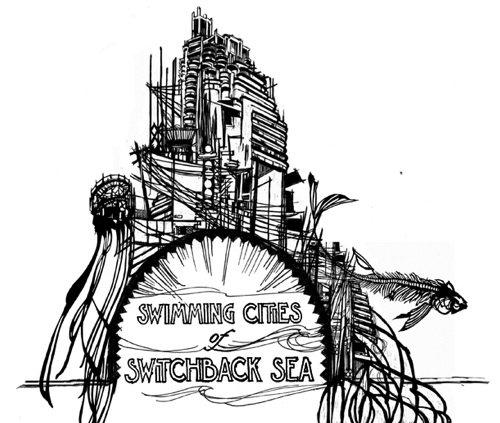 Swimming Cities of Switchback Sea is a series of seven interactive, floating sculptures that will embark from Troy, NY on August 15th and travel down the Hudson River working their way to the New York City Harbor, occasionally stopping to for performances and finally ending up at Deitch Studios in Long Island City, Queens on September 7th.

Swimming cities of Switchback Sea is a flotilla of seven intricately hand crafted vessels that will navigate the stretch of the Hudson River between Troy and the New York harbor this August 15th – September 7th. Imagined as a hybrid between boats and bits of land mass broken off and headed out to sea, the Switchback vessels will make stops in towns along the river bringing performances and music. Over the course of three weeks they will make their way toward their home port – an invented landscape tucked into a niche along the East River in Long Island City, Queens.

In 2006 Swoon and the Miss Rockaway Armada organized a similar trip down the Mississippi River which was featured in The New York Times.

UPDATE 1: Chicken John and Eddie Codel created a video about Swimming Cities of Switchback Sea selling “Tickets to the Moon” to help support the project.

UPDATE 2: The New York Times has an article by Julie Bloom about Swimming Cities of Switchback Sea: “A Floating City With Junkyard Roots”