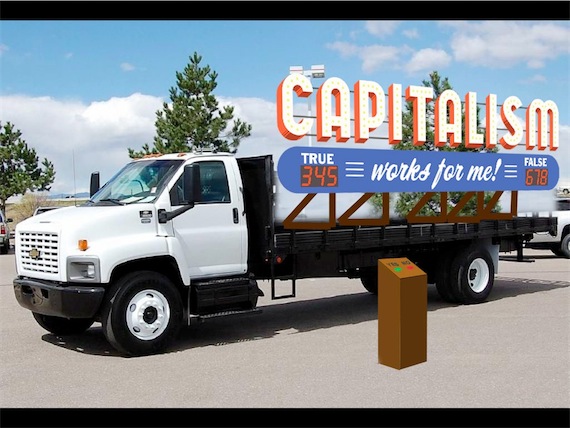 Prolific prankster artist Steve Lambert is building a giant truck-mounted sign that reads “Capitalism Works for Me.” The sign will tour the United States on the bed of a truck, and passersby will be able to take part in the project by choosing “true” or “false”–their votes will be tallied on the sign for all to see. Lambert will document the tour with a website and eventually, a book. He’s raising funds for the project on Kickstarter.

You may remember Steve Lambert from such pranks as the fake New York Times edition that announced the end of the Iraq war, or his project to talk to anyone about anything. He’s also the guy with The Most Awkward 404 Not Found Page on the Internet.

I’m excited that this piece takes on what for most Americans is a taboo, or even nonexistent subject: whether global, hegemonic capitalism actually works for most people! But whew, talking about that is boring! And telling people what to think is worse! This sign gets passers by to participate in deceptively simple vote (True/False) which only pretends to offer resolution. Every aspect of the interaction draws them in to more complex questions and conversations, leading to new thoughts and ideas about a better world!