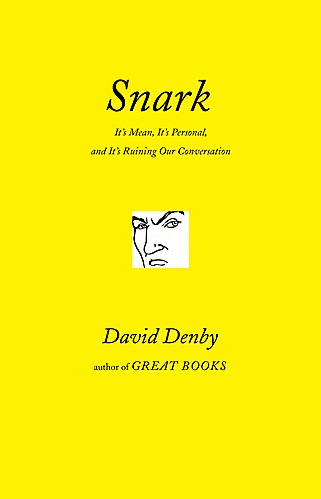 “Snark” is a new book by David Denby on the history of snark.

What is snark? You recognize it when you see it — a tone of teasing, snide, undermining abuse, nasty and knowing, that is spreading like pinkeye through the media and threatening to take over how Americans converse with each other and what they can count on as true. Snark attempts to steal someone’s mojo, erase her cool, annihilate her effectiveness. In this sharp and witty polemic, New Yorker critic and bestselling author David Denby takes on the snarkers, naming the nine principles of snark — the standard techniques its practitioners use to poison their arrows. Snarkers like to think they are deploying wit, but mostly they are exposing the seethe and snarl of an unhappy country, releasing bad feeling but little laughter.

David is a staff writer and film critic at The New Yorker.