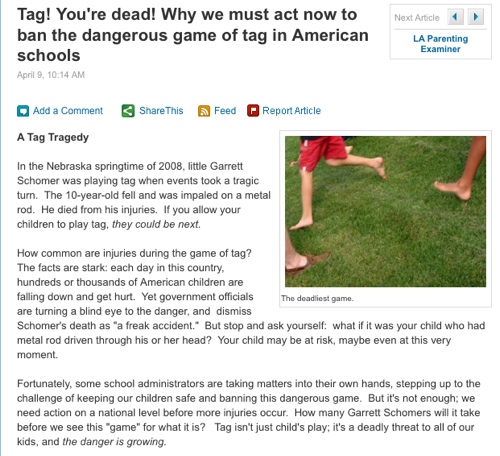 Some stories just have to be told, like this one about a prankster/writer and the SF Examiner. It all starts with the payment system at the Examiner. The Prankster explains:

You’re probably familiar with Examiner.com and other “pay per click” sites for writers. Even though the pay is dismal, I thought it might be useful in some way to be the “Los Angeles Family and Parenting” columnist for the site.

Yet after a short time, the whole setup began to grate on me and my (admittedly puny) sense of journalistic ethics, and it all just fed my outrage about the direction the world is going in. Is this really the future of journalism? There is no fact checking, no editing, no nothing except a regular series of emails from your “channel manager” imploring you to employ SEO and “viral marketing” to increase the number of hits your page gets, and writers are paid next to nothing. An example from one of their emails: “Examiners should avoid obscure references, no matter how ‘clever.’ Search engines don’t recognize cleverness.”

Mediabistro’s FishbowlLA has the full story, but the long and short of its that the prankster decided to increase page views by writing more and more controversial articles with less basis, in reality, to see if the Examiner would publish them. Soon, these articles became pure comic gold, like articles on “the need to ban peanuts” and “why panic is an appropriate response to the swine flu.”

These articles, for the moment, lost to the sands of the internet as they have been scrubbed from the Examiner.com site.

Finally, it is worth reading what Travis Henry, Director of Editorial at Examiner.com, had to say in an extended comment on LA Fishbowl. This is interesting either way. Is it too simplistic to look at it as an abuse of trust? Was it a breach of journalistic ethics? Or a failure of the Examiner.com to fact check supposed commentary on news?

Thanks to heathervescent for the tip!