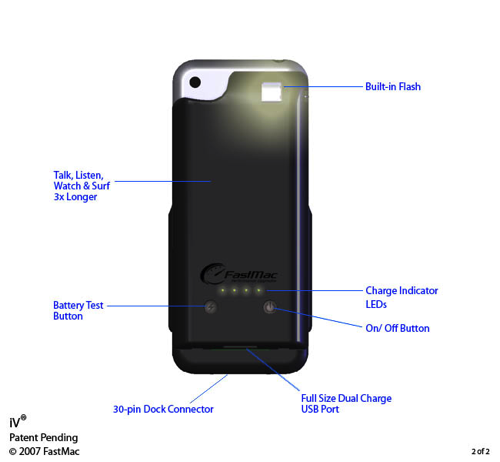 FastMac has just released their new TruePower iV, a iPhone battery charger and case with a built-in light that also works as a flash. It charges both the iPhone and battery at the same time and has an additional USB port so you can charge other devices. The iV sells for $79.95 and is available for both the original and new 3G iPhones.

The iV is an on-the-go mobile battery charger that allows you to continue using your iPhone even as you charge it. In addition to the 30-pin Dock Connector port used for charging and syncing your iPhone, the iV also has a full-size USB port that can simultaneously charge another device such as a Bluetooth headset, digital camera, iPod or even another phone. The iV also includes a built-in flash LED that can be used for emergencies and low light photos/ videos.