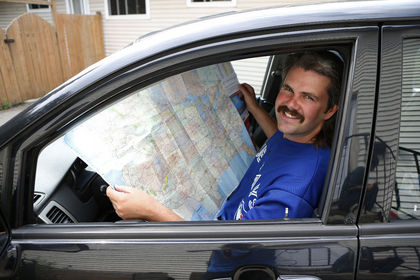 “Blair McMillan holds a map he uses instead of a GPS in his car. McMillan has rid his family of all technology, living his life as he did in 1986.”

Maryam Shah of the Toronto Sun is reporting that a family in Ontario, Canada is spending an entire year living as if it were 1986, which means they are going without smartphones, internet, and other modern technology until April 2014. The family’s mulleted father Blair McMillan (who was born in 1986) spearheaded the project when he became alarmed by his young son’s dependency on technology and lack of interest in playing outside. He states, “We’re parenting our kids the same way we were parented for a year just to see what it’s like.” The full story and a video of the family is available at Toronto Sun.

Fully committed to living like an ‘80s man, Blair answered his door dressed in a baseball jersey and denim cut-offs. His crowning glory? A mullet and a bushy moustache.

“Business in front, party in the back,” he said with a grin.

Even his kids sport the same hairstyle.