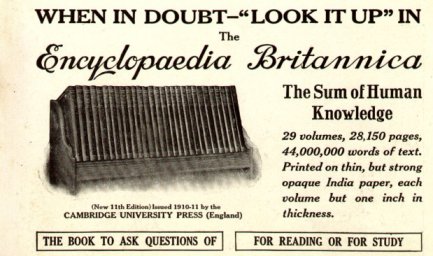 After 244 years of publication, the print version of the Encyclopaedia Britannica is being discontinued. Of the 12,000 sets printed for the final 32 volume 2010 edition, 4,000 are still available (at $1,395). From The New York Times Media Decoder:

In an acknowledgment of the realities of the digital age — and of competition from the Web site Wikipedia — Encyclopaedia Britannica will focus primarily on its online encyclopedias and educational curriculum for schools. The last print version is the 32-volume 2010 edition, which weighs 129 pounds and includes new entries on global warming and the Human Genome Project.

The Encyclopaedia Britannica Blog has posted about the discontinuation and released a video on Britannica’s digital efforts.