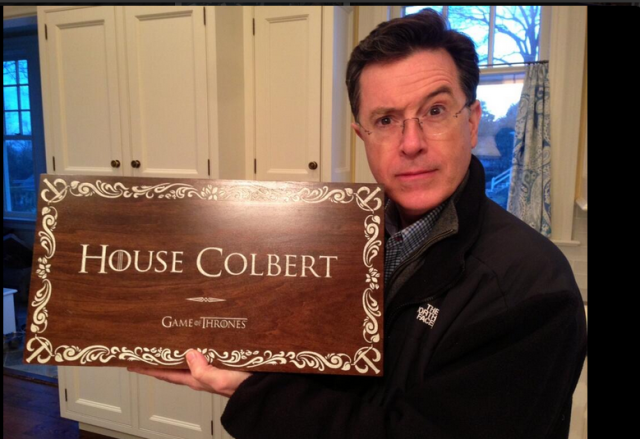 Stephen Colbert announced as the next host of #LateShow ! More details here: http://t.co/IhObTsNVyL

Specific creative elements, as well as the producers and the location for the Colbert-hosted LATE SHOW, will be determined and announced at a later date. “Stephen Colbert is one of the most inventive and respected forces on television,” said [Les] Moonves. “David Letterman’s legacy and accomplishments are an incredible source of pride for all of us here, and today’s announcement speaks to our commitment of upholding what he established for CBS in late night.”

Stephen’s response was, of course, on the mark.

Simply being a guest on David Letterman’s show has been a highlight of my career,” said Colbert. “I never dreamed that I would follow in his footsteps, though everyone in late night follows Dave’s lead…I’m thrilled and grateful that CBS chose me. Now, if you’ll excuse me, I have to go grind a gap in my front teeth.