Frank Swain of SciencePunk reported that researchers at the Institute for Ophthalmic Research at the University of Tübingen ran an experimental trial where they “restored vision in blind patients using tiny retinal implants embedded in the eye.” To note, the blind volunteers had all lost their vision through hereditary diseases but could still detect light.

A light-sensitive, externally powered microchip was surgically implanted subretinally near the macular region of volunteers blind from hereditary retinal dystrophy. The implant contains an array of 1500 active microphotodiodes (‘chip’), each with its own amplifier and local stimulation electrode. At the implant’s tip, another array of 16 wire-connected electrodes allows light-independent direct stimulation and testing of the neuron–electrode interface. Visual scenes are projected naturally through the eye’s lens onto the chip under the transparent retina. The chip generates a corresponding pattern of 38 × 40 pixels, each releasing light-intensity-dependent electric stimulation pulses. Subsequently, three previously blind persons could locate bright objects on a dark table, two of whom could discern grating patterns. One of these patients was able to correctly describe and name objects like a fork or knife on a table, geometric patterns, different kinds of fruit and discern shades of grey with only 15 per cent contrast. Without a training period, the regained visual functions enabled him to localize and approach persons in a room freely and to read large letters as complete words after several years of blindness. These results demonstrate for the first time that subretinal micro-electrode arrays with 1500 photodiodes can create detailed meaningful visual perception in previously blind individuals. 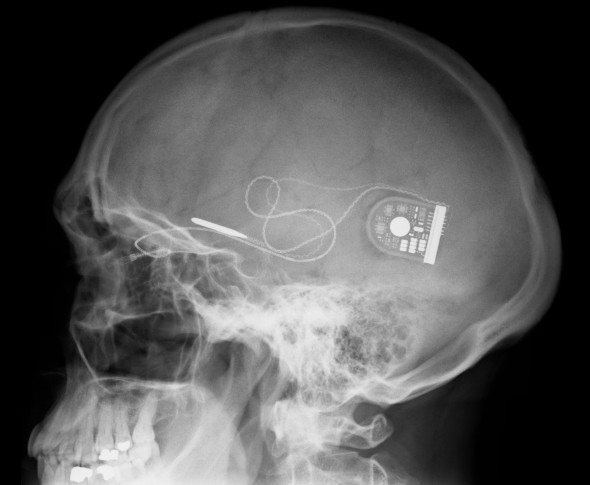 images and video via ScienceBlogs