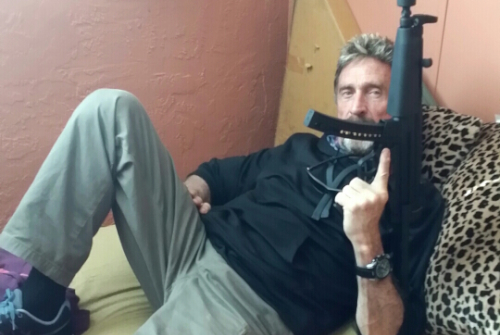 John McAfee, the founder of the company that originally created McAfee Antivirus, provided some strange answers to interview questions from The Setup, a website that interviews folks about the things they “use to get stuff done.” Typically this is about the hardware and software, like iOS or Android smartphones, but not in McAfee’s case. Specifically, a number of McAfee’s answers to seemingly straightforward questions included a variety of guns and weaponry. One answer also suggests he uses “smart drugs” that allow him to solve complex equations in his head. The full interview is available over on The Setup.

McAfee is perhaps currently best known for the legal issues stemming from his evasion of the Belize government, and subsequent illegal entry into Guatemala, in 2012 following the suspicious death of his neighbor Gregory Viant Faull.

What hardware do you use?

My tools for national security consulting are primarily a semi-auto .22 rifle with a silencer. They are virtually completely silent and can pierce car doors and other light armor. They are perfect for urban environments.

image via The Setup