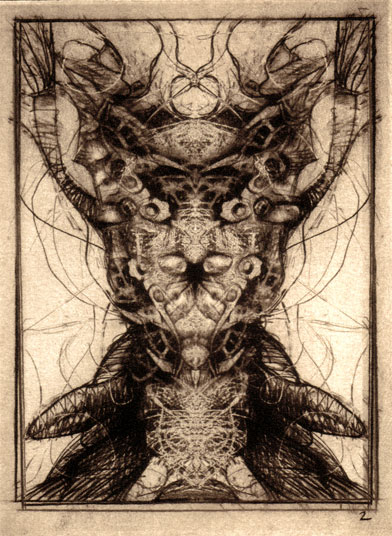 As part of their 3rd anniversary, Varnish Fine Art has a new group show called “3 To The Third” running April 18th through June 3rd, featuring the works of Brian Elliot, Liz Orleans and Kevin Evans. The show’s opening reception is this Saturday, April 22nd from 7-11pm.

Here more from John Law on Kevin Evans and the show:

Kevin Evans is the single most Lovecraftian artist/human I know (and I know a bunch!) In his spare time away from his career professionally designing strange characters and landscapes for Lucas Arts & other computer games companies, Kevin has spent untold hours toiling away in obscurity, creating painstakingly detailed illustrations, coldly compelling paintings and the occasional lurid sculpture.

Like a modern day Charles Dexter Ward, he kept it all to himself for years, perhaps for the best of humanity. Until now he has steadfastly avoided most attempts to show, sell or in any way promote his work. I always expected that late one night while slaving away at the latest ghoul, kraken or evil line print Kevin would, through some unholy convergence of geomantic happenstance conjure up a ravenous succubus that would then suck the flesh from his face leaving him a gibbering madman, a gapping maw with no eyes, ears or chin.

Oh, did I mention heâ€™s my favorite artist? Heâ€™s also one of the handful of people responsible for transporting the mind numbing hedonist death cult out to the Black Rock Desert in 1990, a fact that horrifies and embarrasses him to no end these days.

Kevin is finally allowing a few of the dangerous images heâ€™s been hoarding, out into the cold clear light of day at the Varnish Gallery. If youâ€™re a wanna be art collector, donâ€™t miss this show, heâ€™s still affordableâ€¦ Donâ€™t miss out; one of his creations could super-animate at any time, dragging the artist down into the underworld never to be seen again – exponentially increasing the worth of his paintings and drawings, of course.

Each of Brian Elliot’s cast metal pieces—about 27″ high, 11″ deep & 18″ wide—has an improbable charisma & beauty, which is only enhanced by their lightness of appearance. These brave ladies, like a fleet of demure, feminine Zeppelins, look as if they might float away
unless tethered.