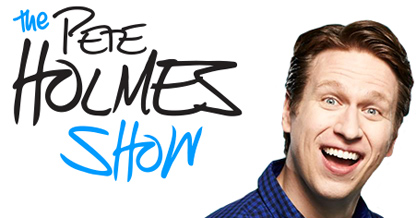 The Pete Holmes Show is a brand new late night TV show hosted by Massachusetts-born comedian Pete Holmes that will feature sketches (check out his Ex-Men: Gambit video), interviews (with great guests such as Rory Scovel, Deepak Chopra, and Rob Corddry) and more. It airs right after Conan on weeknights and is set to premiere on October 28th, 2013 at midnight on TBS.

Pete Holmes is a comedian. Maybe you know him from his podcast “You Made It Weird.” Maybe you saw his half-hour “Comedy Central Presents.” Or on Conan. Or Jimmy Fallon. Or maybe you saw him on VH1. Or heard him as the e*trade baby or on Comedy Central’s “Ugly Americans.” Pete was named one of Variety’s Top Ten Comics to Watch. Pete also draws cartoons for The New Yorker, wrote for NBC’s “Outsourced” and FOX’s “I Hate My Teenage Daughter.”