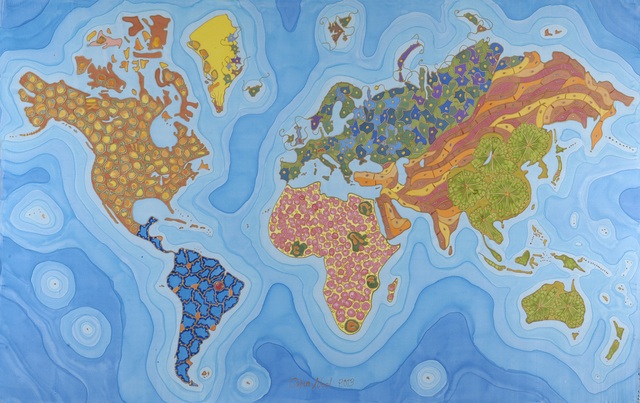 Scientific artist Odra Noel has created The Map of Health (larger version), a map that depicts countries and regions as different bodily tissues based on their disease rates.

North America struggles with rising obesity, and this adipose tissue (fat) is more beautiful close up than you would imagine.

Central and South America are represented here by pulmonary tissue (lungs); smoking and respiratory infections are a leading cause of death.

Great swathes of the middle East and central Asia are shown here as cardiac muscle (heart), as these regions are afflicted with rising levels of hypertension and other causes of heart and cardiovascular failure.

The far East and the Pacific look beautiful in pancreatic acinar tissue; its failure causes diabetes, a major problem in this area, frequently described as a diabetes epidemic.

And Africa is made of blood here. The only continent where the leading cause of death are transmittable diseases (infections), notably malaria and HIV.

There are also five mitochondria, the cells responsible for energy creation, hidden throughout the map. For more background on the map’s creation, head over to Noel’s website.