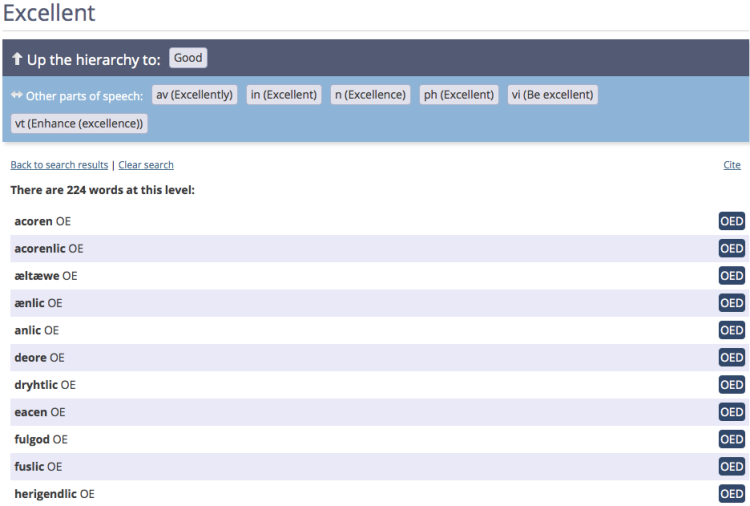 An example of results for the word “excellent”

The Historical Thesaurus of English Project, started in 1965 by British historical linguist Michael Samuels, works to chart “the semantic development of the huge and varied vocabulary of English.” After 44 years of research and collaboration primarily at the University of Glasgow, a print edition of the thesaurus was published in 2009.

Language is always changing, of course, so the project is ongoing at the Historical Thesaurus of English website, launched just last week on the 50th anniversary of the start of the project. The digital version–containing almost 800,00 words–is the self-proclaimed “first historical thesaurus ever produced for any language, containing almost every word in English from Old English to the present day.”

The thesaurus is arranged in a hierarchical style, with words classified in semantic categories.

This hierarchical structure differs from the organization of many other thesauri; Historical Thesaurus categories relate to others not just linearly, but can operate either horizontally (on the same hierarchical level) or vertically (on a higher or lower level, either containing or being contained by another category). In addition, each concept is able to contain a series of subcategories within itself, separate from the main sequence. You can see this on any category page on this site, which each have navigation options to travel “Up the hierarchy”, “Down the hierarchy”, a set of subcategories (if present), and links to move horizontally to other parts of speech which refer to the same concept. Choosing to go up the hierarchy and scrolling down to the bottom of a category page can let you see the neighbour categories of any given concept. 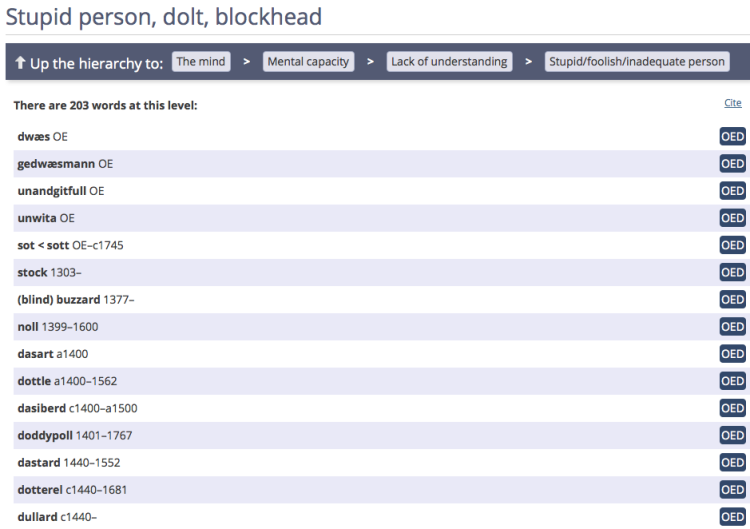 An example of results for the word “stupid”

images via Historical Thesaurus of English