The Buzzball is are really cool interactive vehicle currently being developed by Evento.

At the heart of the Buzzball is a dual motor configuration, enabling the pilot to control the motion and direction of travel via left and right control triggers, which provides power to the driving wheels.

The amount of power applied to each wheel will determine the direction the Buzzball moves. Powering one wheel will spin the pod and pilot on it’s axis around the inside of the ball changing the direction of travel. If power is applied equally to both wheels the pod will rear up as the wheels climb up the face of the ball forcing the ball to rotate around the pod and powering the Buzzball forward.

This is when the fun starts, as the speed will affect the degree of rotation of the pilot and pod from a partial barrel roll to complete and multiple rotations! 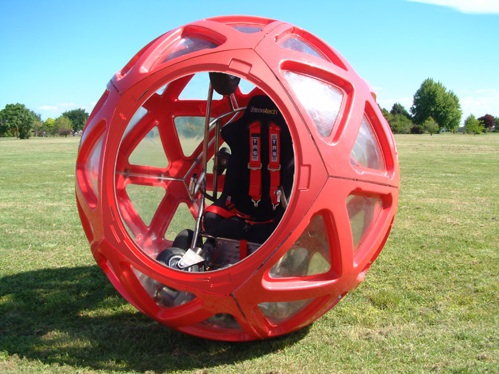