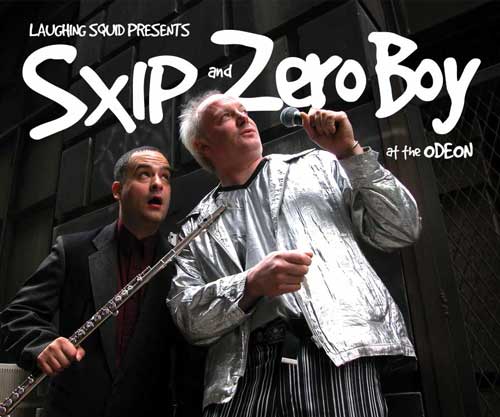 Scott Beale’s images from the show

SXIP’s music swells from a variety of re-imagined instruments: The Industrial Flute, Obnoxiophone,
Mutant Harmonicas, Triple Extended Pennywhistle, Miniature Hand Bell Choir and Regurgitated Music Box
Choir. The music is huge and beautiful. SXIP takes the raw sound of his breath and transforms it into something truly impossible to describe.

SXIP is a circus compose and storyteller. He has appeared with The Daredevil Opera Company at The Kennedy Center in Washington D.C., The Edinburg Festival in Scotland and on Broadway with
Anti-Gravitiy’s Crash Test Dummies. In San Francisco Sxip has performed with The Bindlestiff Family Cirkus at Cellspace. In NYC, he is known for performing at underground parties (Rubulad, The Happy Birthday Hideout, The Madagascar Institute) and for his performance series, at Chashama on 42nd Street. SXIP is currently composing music for puppeteer Erin Eager’s “Savage Nursery”, with a grant from the Henson Foundation, to be workshoped at HERE. He is also composing songs and sound designing,”Marsupial Girl” by Lisa D’Amour, which was developed through a collaboration by The Minneapolis Children’s Theater and New Dramatists.

Performance artist, stand-up comic & “vocal acrobat” Zero Boy recounts his zany adventures in Zeroland through a unique blend of sound and mime, the results being something akin to a performed comic book. Combining movement with live, vocally-produced sound effects, Zero Boy enacts a parade of hilarious, fantastical characters that find themselves in the most unlikely situations. From his New York base Zero Boy has written, directed & performed numerous productions on both coasts and Europe, working in traditional theater, stand up comedy, television, street performance festivals, radio, film, comic books, a national magazine, and on the cutting edge of digital media/art.

UPDATE: photos from the event