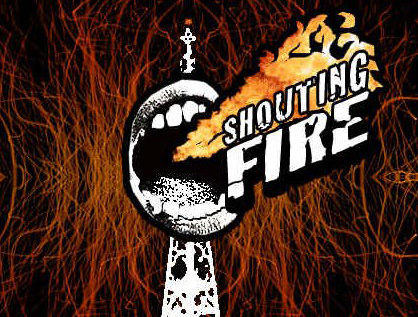 Shouting Fire is an innovative new online radio station that began as an experiment evolving out of Burning Man Information Radio. The station officially launched today, Leap Day and is now broadcasting a live stream 24/7 featuring an eclectic mix of programming.

Friday, February 29th 2008 marks the ignition of Shouting Fire, an online radio station that will bring a mix of alternative art, culture, and thought to the internet airwaves. Spawned by the hard-working radio staff of Burning Man’s BMIR 94.5 FM, Shouting Fire aims to bring the energy and ethos of Black Rock City out of the desert and into the world at large.

Never been to Burning Man? Looking for more than just Black Rock City noise? Not a problem. Although the station will have its share of content relating to Burning Man, the programming will not be “playa-centric.” Because Shouting Fire is not just for “burners”; it’s for everyone with an open mind and open ears. Interviews, news, and audio art. Performance, politics, and perspective. And, of course, lots of eclectic music from DJs who don’t just play music–but who have a passion for explaining, exploring, and celebrating it.

New programming will be added to the lineup as it evolves–and as our extended community (AKA YOU!!!) comes forward with the content. So if you know of something we should know about, or if you want to do a program yourself, email us and let us know what you’re thinking.

We hope you’ll like what you hear. And let us know what what’s on your mind: show ideas and comments (both positive and negative) are welcomed at shoutingfire@shoutingfire.com

Shouting Fire: we build the platform, but we all build the content…