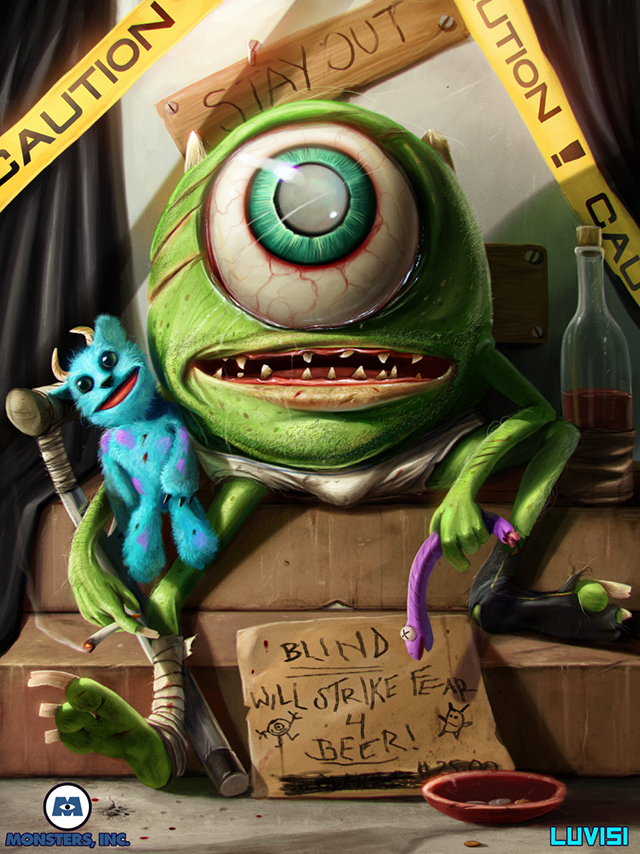 Californian concept artist Dan LuVisi has released a new twisted pop culture illustration portraying Mike Wazowski, an animated character from Monsters, Inc., as a blind and utterly devastated vagabond hiding out on Earth. Previously we wrote about Dan and his ongoing series of pop culture illustrations, which includes Bert and Ernie as dirty thugs and realistic human version of Buzz Lightyear.

Here is the first half of Dan’s dark story for Mike Wazowski:

After Boo was saved, Sully and Mike realized they no longer required scares for cash, thus forcing Mike into a new line of business; comedy.

As Mike continued his stand-up routine with the children in hopes for laughs, Sully partied and wasted money that he didn’t have. The problem is: the world didn’t care, it was Sully, a hero and role model. And everyone loves Sully. Everyone but the one living in his shadow.

Mike was tired of it. Tired of lowering himself to telling jokes, only to hurt himself in the process over, and over again. Mike decided to have a talk with Sully about it, but was continuously avoided. Angered, Mike followed Sully one day, only to realize he was headed for the home of Mike’s girlfriend, Celia.

Mike rushed home, shocked to find the two talking. His anger got the best of him and he attacked Sully. Out of defense, Sully struck Mike, catching his one-eye. Out of confusion and anger, Mike launched his nimble body into Sully, peircing him with his horns, killing him.

As Sully laid dead on the floor, Celia screamed, blaming Mike for the death of him… (read more)