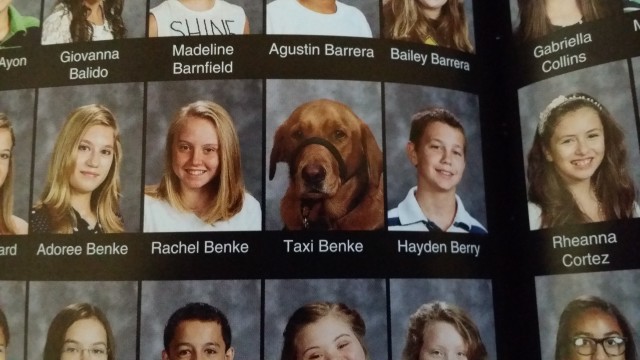 Taxi, a loyal service dog in San Antonio, Texas, took his place in the 7th grade school yearbook right next to Rachel Benke, the young girl with epilepsy who had been in Taxi’s charge for the past four years.

He goes everywhere with the soon-to-be eight-grader, including accepting awards at school, celebrating birthdays, and even on the school track where he one day sprung into action. “Her aide was holding Taxi on the side and he just started pulling away from the aide as hard as he could trying to get to Rachel,” [Theresa] Benke said. She said once they got her inside, Rachel had a grand mal seizure, and Taxi wouldn’t leave the girl’s side. “I don’t know how Taxi new this, but he wouldn’t let anyone near her until the paramedics arrived,”- KHOU 11.