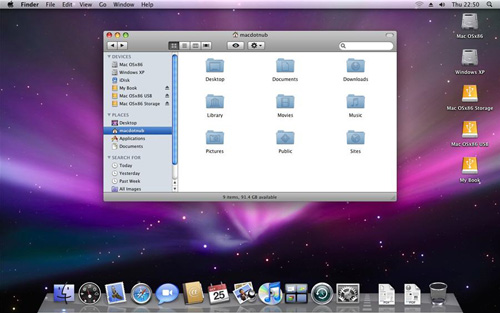 Within 24 hours of the release of Mac OS X Leopard, dailyApps has posted a tutorial on how to install Leopard on a PC (aka HackinTosh) in three easy steps using a patched DVD image based on information posted to the OSx86 Scene forums.

Well its been only a day since the Mac OSX Leopard was released officially by Apple and the hackers have managed to create a patched DVD that everyone like you and me can use to install Leopard on PC’s without having to buy a Mac. Please note the tutorial that I am going to post is still experimental and things might not work the right way simply because it is still early days in hacking Leopard to work on PC’s. Well if you don’t mind your PC getting screwed then go ahead and try out this tutorial.

UPDATE 1: Eric points out that dailyApps is currently down due to the massive traffic their Leopard hack post is generating. While you are waiting for it to come back up, why not enjoy the latest Laugh-Out-Loud Cats by Ape Lad. UPDATE 2: Joe let us know that Coral Cache has cached the blog post.