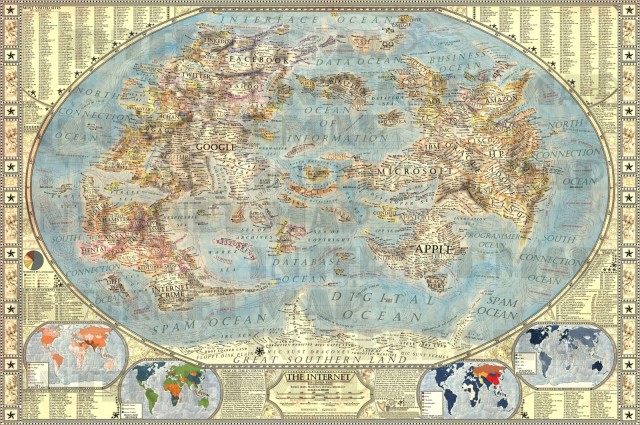 Inspired by xkcd’s own map of online communities, and created by Slovakian graphic designer Martin Vargic/Jay Jason Simons, the Map of the Internet 1.0 is an attempt to present the Internet to scale in map form. Due to the sheer size of the actual Internet, the meticulously detailed map only includes a relatively small amount, but will be updated over time to add more information.

Map of the Internet – First of its kind on such a scale, this map aims for succesful compendation of The Internet to scale suitable for standartized online navigation. This project is still underway, new versions of this map will be available in ulterior months.
Due to the immense size of the Net, only a miniscule portion of it was chosen to represent it on the map. Otherwise, this map would be unreadable and probably undrawable in entire lifespan of average human being.
This poster includes one full map of the internet, 4 minimaps showcasing NSA surveillance, most used social networks, most used internet browser, and worldwide internet penetration, list of Alexa Top 500 websites, quick timeline of the Internet History, top software companies and much more!

Map of the Internet 1.0 is currently available for purchase on Zazzle.