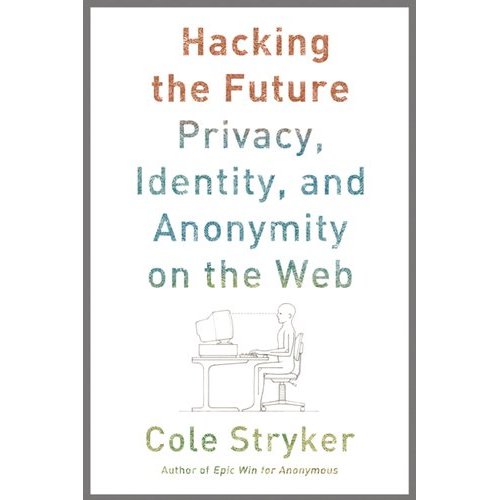 Hacking the Future: Privacy, Identity, and Anonymity on the Web is the recently released book by media consultant Cole Stryker, author of Epic Win for Anonymous: How 4chan’s Army Conquered the Web. He describes the new book as “a broader history of anonymity as a social construct” and says it focuses “on how ‘identity brokers’ like Facebook and Google try to control and monetize your identity, and how technology like Tor, Bitcoin and Freenet empowers anons to rage against these systems of control.”

Stryker was recently interviewed for Tumblr Storyboard (video) and answered questions in a reddit AMA. Kirkus Reviews has reviewed Hacking the Future.

How does anonymity enable free speech – and how is it a threat? “I think anonymity on the Internet has to go away,” famously said by Randi Zuckerberg (sister of Mark), has become the policy for some, while the Stop Online Piracy Act mobilized millions to write Congress in protest. Identity Wars is a broad look at how anonymity influences politics, activism, religion, and art.

Stryker presents a strong defense of anonymity and explores some of the tools and organizations relating to this issue, especially as it has evolved with the ubiquity of the Internet. Cogent and compelling, his examination of online identities, both false and real, is an essential read for the social-networking age.