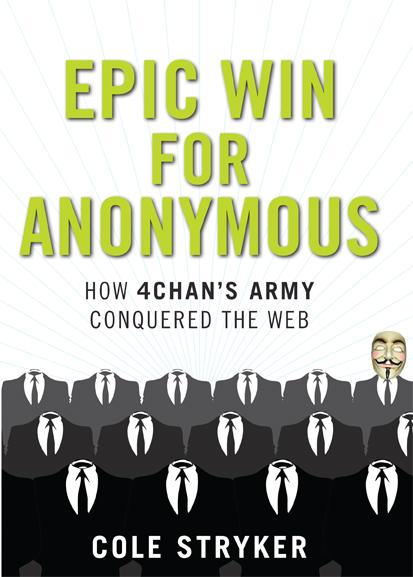 Epic Win for Anonymous: How 4chan’s Army Conquered the Web by Cole Stryker tells the story of 4chan: the anarchic message board, meme incubator, and birthplace of Anonymous. The book will be released on September 1, 2011.

4chan is the “Anti-Facebook,” a site that radically encourages anonymity. It spawned the hacktivist group Anonymous, which famously defended WikiLeaks founder Julian Assange by bringing down MasterCard’s and Visa’s Web sites. Created by a 15-year-old wunderkind in 2003, it is the creative force behind “the Web’s most infectious memes and catchphrases” (Wired). Today it has over 12 million monthly users, with enormous social influence to match.

Cole was recently interviewed by Nitasha Tiku of Betabeat about his new book.

So how did you get started with the book?

I was writing a series of posts about the Jessi Slaughter scenario last summer and those posts got the attention of a literary agent who wanted to do a book on cyber-bullying. While I would have done that book, I was much more interested in the community of 4chan where a lot of that stuff comes from. What motivates someone to try to destroy someone else’s life online? Why is it this place where everyone’s anonymous?