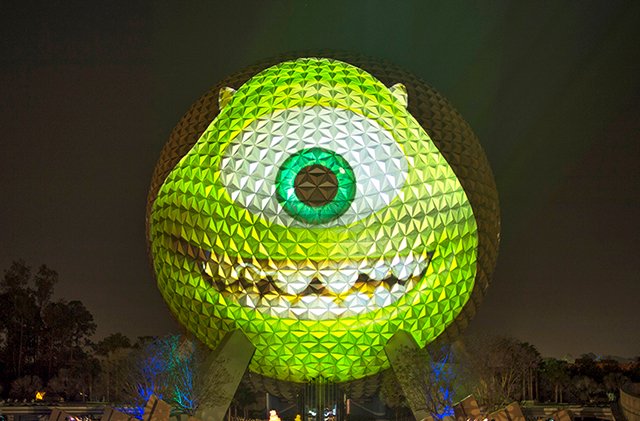 Disney Parks turned Epcot’s 180-foot-tall Spaceship Earth structure into an animated Mike Wazowski, a character from the upcoming Disney•Pixar film Monsters University (in theaters June 21, 2013). Mike is being projected onto Spaceship Earth to both promote the new film and Disney’s Monstrous Summer, which features Disney World’s Magic Kingdom Park, Disney California Adventure Park and Disneyland being open for 24 hours starting Friday, May 24, 2013 (Memorial Day Weekend). You can learn more at the Disney Parks Blog and the Monstrous Summer website.

On May 24, 2013, for one day and one night only, Guests on each coast will have the chance to spend 24 whole hours inside the Disney parks!

From 6:00 AM to 6:00 AM, enjoy all the monster-themed madness inside Magic Kingdom park at Walt Disney World Resort in Florida, as well as Disneyland park and Disney California Adventure park in California. From special entertainment and monstrous merchandise to frightening food and boo-verages, this “All-Nighter” is shaping up to be one scary good time!