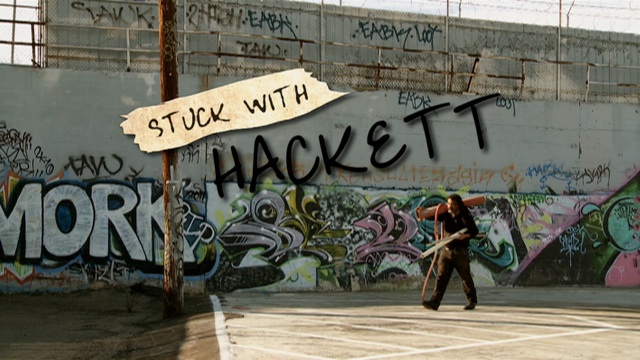 Co-founder and Director of Brooklyn’s mechanical art “combine”, Madagascar Institute, “survivalist savant” Chris Hackett is returning to the Science Channel on August 18, 2011 at 10:30 PM with his television show, Stuck with Hackett. Viewers got an early sneak peek at the show in December 2010 during a Science Channel “special look at 2011” programming week.

Presented as what happens “when MacGyver meets Survivorman“, Hackett searches out ‘obtanium’, his word for precious discarded junk, in a variety of places this season according to the show’s episode guide. These places include an abandoned hospital, an aviation junkyard, a grocery store dumpster and a plethora of other potentially unsavory locales.

Hackett has started blogging about his thoughts on the TV series, the inspiration for his craft and really, allowing his audience the chance to get to know him a little better in his own words at Stuck With Hackett. The Science Channel has even created a digital puzzle in his likeness.

Stuck with Hackett features “alternative engineer” and survival expert Chris Hackett. Each episode finds Hackett left alone in an extreme environment — from deep wilderness, to ruined cities, to arid deserts — with little more than his wits and ingenuity. The goal isn’t survival, however; it’s luxury…achieved by any means necessary.