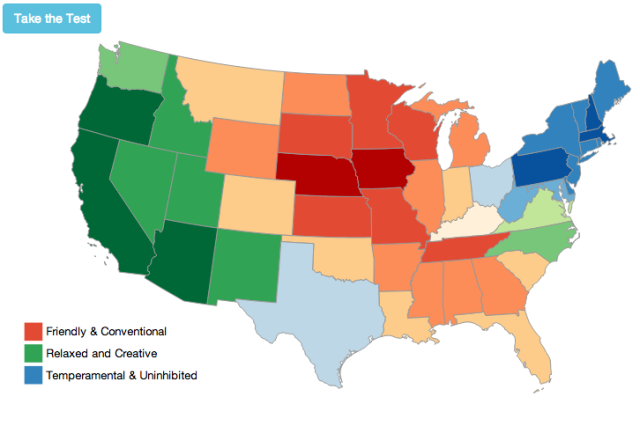 Time Science & Space created an interactive map based upon a recently multinational study that was conducted to determine personality traits that are most predominant in each state in the US.

The study, published in the Journal of Personality and Social Psychology, was an exhaustive one, spanning 13 years and including nearly 1.6 million survey respondents from the 48 contiguous states and the District of Columbia. (Alaska and Hawaii were excluded because not enough people responded to the researchers’ questionnaires.) The subjects, recruited via websites and other means of advertising throughout the academic community as well as through less rarefied platforms like Facebook, were asked to take one of three different personality surveys, though the most relevant one was what’s known as the Big Five Inventory…As its name implies, the survey measures personality along five different spectra, with the Openness, Conscientiousness, Extroversion, Agreeableness and Neuroticism labels forming a handy acronym: OCEAN.

You can take the abbreviated test here and the full test here.