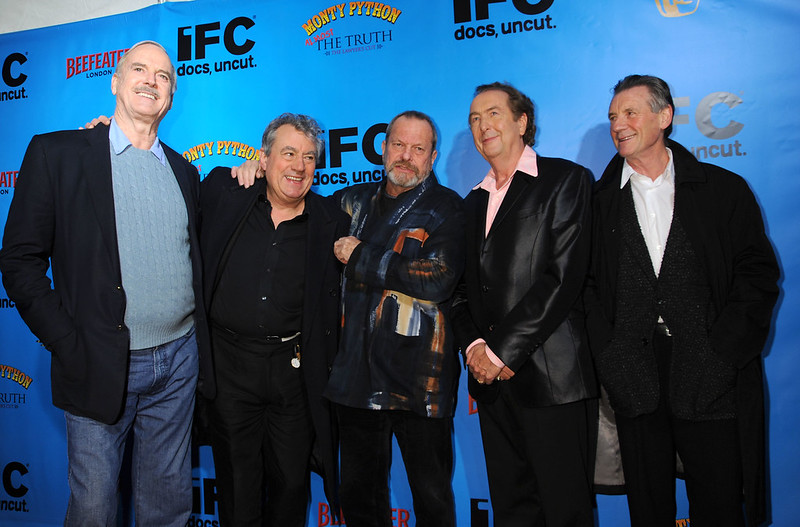 The five living members of Monty Python may appear in a movie together again soon. The film Absolutely Anything is described as a “sci-fi farce combining CGI and live action” with a Python-esque sesnsibility. It’s in pre-production.

It won’t be a Python film per se, but troupe-member Terry Jones will direct. Jones directed the Python films Life of Brian and The Meaning of Life, and co-directed Monty Python and the Holy Grail with Terry Gilliam.

“Anything” is based on a script developed by Jones and Gavin Scott over the past two decades. [Mike] Medavoy, a producer on the Pythons’ Life of Brian, is producing along with David Thwaites and Chris Chesser, in conjunction with U.K. partners Bill and Ben Prods.

Gilliam, Michael Palin, and John Cleese are already signed on. They play aliens who bestow “total power” on one fortunate (or is he?) human. Sounds like the aliens are part of the CGI portion of the film, but there’s a suggestion the animated aliens will bear a resemblance to their voicers. Robin Williams will also appear as the voice of a talking dog.

Besides the late Graham Chapman who is otherwise occupied (Chapman has gone to meet his maker, is bereft of life and metabolic processes, rests in peace, and has joined the choir invisible), the only Python not yet confirmed is Eric Idle who has been focused on his musical adaptation of Python-ness Monty Python’s Spamalot for many years. The show ran on Broadway from 2005-2009 and has been touring the U.S. and the world in recent years.