In this special post, Contributing Coleoidea, Burstein, interviews the legendary Hal Robins (aka Dr. Hal) on his talents, arts, and history of involvement in the San Francisco fringe arts. Dr. Hal is truly a cultural treasure with a mind so engaging that there is a live action game show Ask Dr. Hal where its basic premise is, in effect, to simply ask the man questions. See it live this week at S.P.A.C.E. (Space Preservation Agency for Creative Enterprise) in the J.R. “Bob” Dobbs Memorial Hall at 354 5th St. (5th St. at Folsom).

Burstein! – Dr. Hal, your knowledge of poetry is legendary, as is your capacity to recite verse at whim. What draws you to verse in particular, and do you generally prefer verse to prose?

Hal – Well, I find he best verse has an incantory quality, like chanting a spell. Some poems in fact are spells. But verse has rhythm — a beat– which propels it forward. Of course, to memorize long stretches of prose one must also seek out and find this beat, which is idiosyncratic and more subtle. The structure of verse is amenable to memory. And then there’s the matter of the content. Ezra Pound characterized poetry as, “language charged to the utmost with feeling.” Though not a fan of Mussolini, I endorse Pound’s view. You get a better performance from the freighted words of verse than you would from reading the telephone directory– though that, too, has its place in the annals of public performance. Burstein! – Can you tell us if your love of literature has affected your graphic art?

Hal – Literature helps and informs the graphic artist. The thankless task of cartooning and drawing comic books is vastly aided by wide reading and understanding.

Burstein! – Would you say the impact has been different upon work for SubGenius materials, as opposed to the Dinosaur Alphabet?

Hal – Oh, the impact doubles for producing theologically correct images when the task is to illustrate our Church of the SubGenius literary material– you must do the homework before you can create an appropriate picture for a work such as our Revelation X: The “Bob ” Apocryphon. As for my book Dinosaur Alphabet, it is a collection of short poems about various dinosaurs, which I then illustrated and provided with copious notes to defend my assertions. I also designed the Alphabet itself, initial letters, or drop-caps, each of which incorporated an image of the eponymous dinosaur.You might also look for my other self-illustrated book, The Meaning of Lost and Mismatched Socks, from North Atlantic Books. 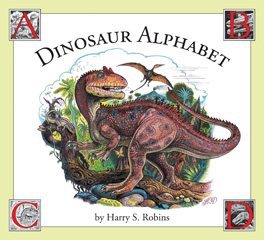 Burstein! – How did you become involved with the Church of the SubGenius?

Hal – Years ago, working at Rip-Off Press, the underground comic book factory and studio, Paul Mavrides retrieved the ur-pamphlet, the first put out by the Church at the beginning of the Eighties, from the wastebasket of Fred Todd, the publisher at Rip-Off, who was never sent a good idea that he didn’t discard. Paul and I, however, found the pamphlet intriguing and hilarious. Responding to the (then) address of the SubGenius Foundation on the pamphlet, Pamphlet No.1, which begins, “The World Ends Tomorrow and You May Die!,” we entered into correspondence with Rev. Ivan Stang, the Sacred Scribe, who, it turned out, was already familiar with our work, and quickly became involved at the highest levels with Stang and his people. I have written lyrics for the Church, Hymns, Elegies & Orations. Eventually we were all present at the assassination of J.R. “Bob” Dobbs, in 1984– the so-called “Night of Slack.”

Burstein! Could you go further into this?

Hal – I prefer not to… the memories are painful… Students of San Francisco history know the sad details. Archived material is at the SubSite– subgenius.com –for those who feel they have to wallow in the details. The assassination has often been ritually enacted at our “Devivals.” The next one of these will be this October in Portland, Oregon.

Burstein! – You are locally known for, amongst other things, the Ask Dr. Hal Show, which is co-hosted by Chicken John. How did you two fall into cahoots together, and how did that lead to the Ask Dr. Hal! Show?

Hal – Somewhere back in the middle Nineties I was performing at the old Klub Kommotion on 16th St., a venue like many others now long gone. Chicken approached me and told me I could do better– i.e. perform with him. Our association in various shows swiftly taught us each other’s strengths and weaknesses. In the Black Rock desert Chicken constructed the monstrous, Cyclopean buttocks of the flame-spouting Wizard of Ass, a mechanism in which I was concealed with a microphone. I answered the questions of various supplicants until forced to leave the giant structure, as it was on fire at the time. This question-and-answer show was, in fact, the template for the stage shows we do now. Burstein! – Dr. Hal, what are your current projects, in general, and do you have any comic projects ongoing at this time? And tell us whether you are self-publishing or not.

Hal – I am working on a 3-page story for a comic book which will probably come out this winter– yes, they still exist. Look for “Belly Dance Comix No. 2” from Clone Comics. I am also working on a series of trading cards called Rockets, Jets and Spacemen for Monsterwax Cards in Florida. At this time I’m also designing tattoos for various people in the arts here, and hope to complete some art for Loop! Station in the near future.

The only self-publishing I seem to be doing these days is putting out the weekly Dr.Hal Report, a mass-mailed email to my special list about our shows. I know some people, who have complained of its fatiguing length and complexity, would rather this journal just go away. But if you’d like to receive it, write me at hal@askdrhal.com –and make sure the words, “SUBSCRIPTION REQUEST” appear in the header.

Burstein! – Thanks, Dr. Hal! Why don’t you give us a plug for your show?

Hal – Gladly. We are doing the Ask Dr. Hal! Show every Wednesday night. Though Chicken is still away, he’s expected to return at any time, and we expect to take up the show again where it’s been most of this year– at his place on Cesar Chavez. The official web site at askdrhal.com will be the place to check for the news when it happens. Chicken has grandiose plans about extending the show into other dimensions of performance.

Right now we are at 3 blocks below the Powell St. BART Station and 2 blocks south of Mission. But, for now, we’re no longer in the Mission, but “south of the Slot.” Our crowds seem to be finding us at S.P.A.C.E. (Space Preservation Agency for Creative Enterprise) in the J.R. “Bob” Dobbs Memorial Hall at 354 5th St. (5th St. at Folsom).