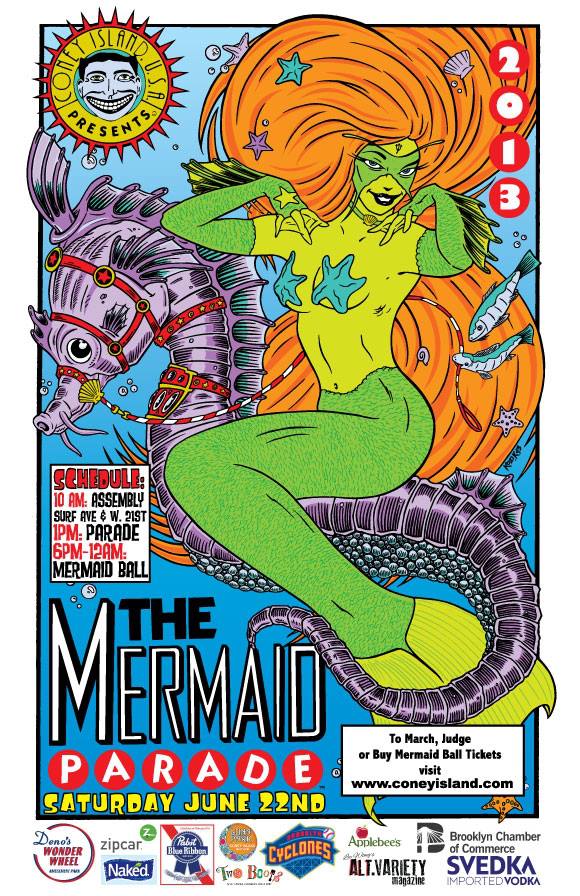 The 31st annual Coney Island Mermaid Parade, the largest art parade in America, takes place June 22, 2013 at 2 PM. This year’s parade features Judah Friedlander as King Neptune and Carole Radziwill as Queen Mermaid. The parade will be followed by an official after party, the Mermaid Riverboat Ball. Mermaids and mermen looking for alternative after party can attend The Drunken Mermaid Gala at the Gowanus Ballroom, featuring the Extra Action Marching Band. And if you’re in need of a last-minute costume, look no further than this DIY squid costume by Tool Using Animal.

The parade was in danger of being canceled this year due to after effects of Hurricane Sandy, but the parade’s organizer, Coney Island USA, prevented the cancellation by raising more than $100,000 on Kickstarter.

The Mermaid Parade is the largest art parade in the nation. A celebration of ancient mythology and honky-tonk rituals of the seaside, it showcases over 1,500 creative individuals from all over the five boroughs and beyond, opening the summer with incredible art, entrepreneurial spirit and community pride. The parade highlights Coney Island Pageantry based on a century of many Coney parades, celebrates the artistic vision of the masses, and ensures that the summer season is a success by bringing hundreds of thousands of people to the amusement area in a single day.