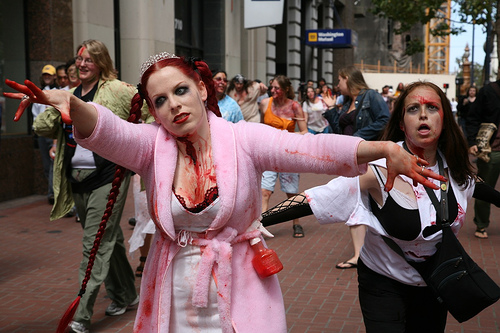 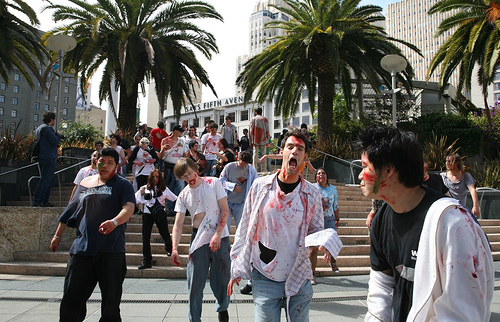 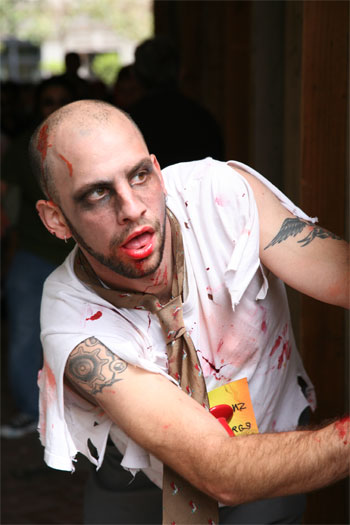 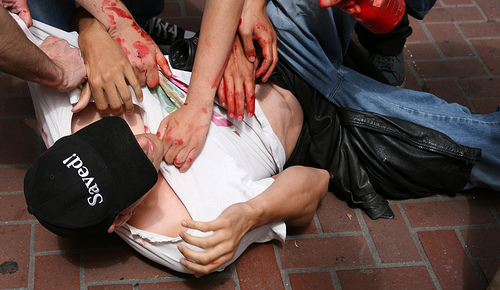 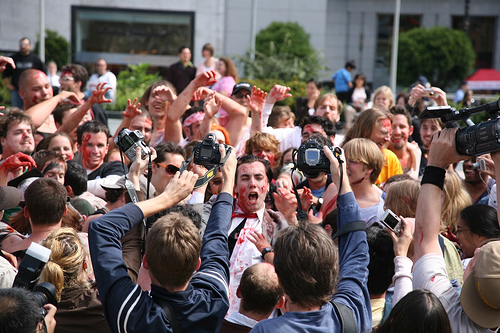 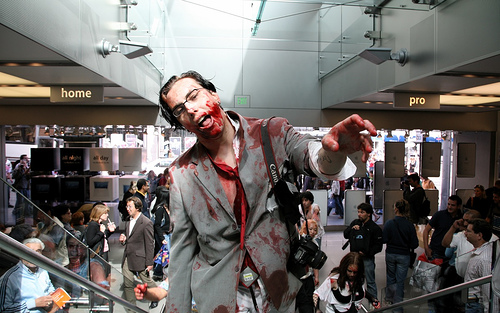 Quick, run to the nearest shopping mall and lock yourself in. This afternoon San Francisco was invaded by a brain-eating mob of zombies. Here’s photographic proof of their existence. The zombies were first sighted at the corner of Sansome and Market Street, then they proceed up Market Street, converting innocent bystanders into the undead as they slowly marched on. Then they turned up Powell Street at the cable car turnaround, bewildering the tourists as they were waiting in line. After claiming Union Square as their own, they then went back down toward Market where they proceeded to invade the flagship San Francisco Apple store, causing chaos at the Bandwidth Shindig! which was taking place upstairs. Their current whereabouts are unknown, but rumor has it that they were looking for a “think tank” to find more Brains!!!!

As expected this unusual zombie activity has been well documented on Flickr.

This wasn’t the first zombie attack. Last year zombies took over Canada starting in July 2005 with Montreal and then in September 2005 it was Vancouver (Vancouver Zombie Walk 2005), followed by Toronto (Toronto Zombiewalk 2005) in October 2005. After the Montreal invasion, the zombies moved down to the US and in July 2005 they invaded San Francisco. Last Christmas, even santas became zombies at Zombie Claus in Ypsilanti and Ann Arbor, Michigan.

In 2006, the zombies made their way to Australia, first to Brisbane in April (Brisbane ZombieWalk) and then Melbourne in May (Melbourne Zombie Shuffle). Most recently, the zombies returned to Vancouver (Zombie Walk 2006).

UPDATE 1: Here is video of the zombies invading the Apple Store during the Bandwidth Shindig.

UPDATE 2: The Zombies returned to San Francisco in May 2007.