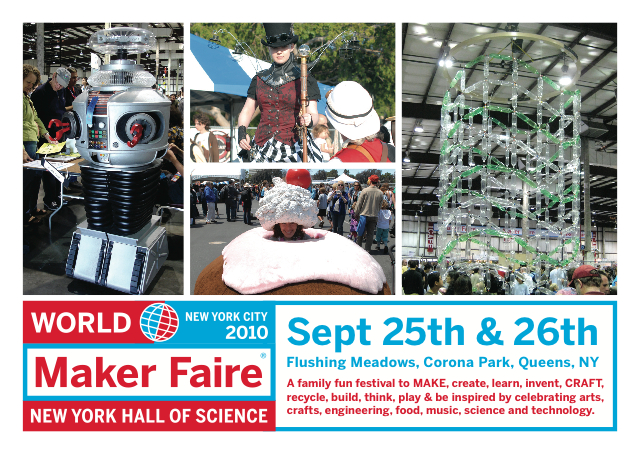 Created five years ago in northern California by the publishers of MAKE magazine, Maker Faire showcases the best of do-it-yourself science and technology. Each year, the Faire has increased in popularity, and the demand for an east coast Maker Faire has been equally consistent. NYSCI is New York’s center for hands-on fun and learning and a fitting host for the Faire. NYSCI was founded at the 1964-65 World’s Fair as a showcase for the science of tomorrow. In 2010, World Marker Faire will show us that the future is in our hands—and the hands of people who make, create, invent and craft. World Maker Faire is an indoor/outdoor event on NYSCI’s 20-acre site inside Flushing Meadows Corona Park. In addition to the more than 300 makers on display, NYSCI’s 450-plus hands-on exhibits, science demos, and art-technology pieces will be open to all Maker Faire attendees.