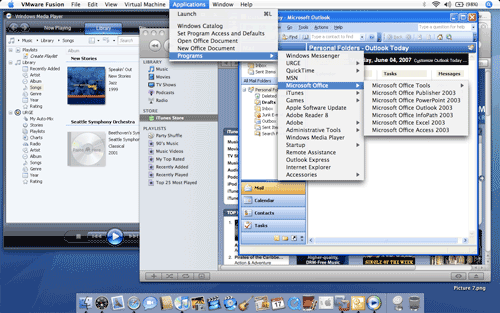 I just installed VMware Fusion 1.0, a new desktop virtualization program that allows you to seamlessly run multiple operation systems on your Intel-based Mac. I setup a virtual machine for Windows Vista on my Mac Pro. The whole process was super easy and took only a few minutes, in fact for me it was much faster than installing Windows on a PC. So far everything works really well and I like it as much, if not more than Parallels Desktop for Mac (another great virtualization program).

Oh and then there’s VMWare’s amazing Unity feature which allows you to run Windows apps alongside your Mac apps. From what I have seen so far, it is even better than the Parallels’ Coherence mode.

On a sidenote, VMWare just had their IPO yesterday with a 76% gain in just one day, making it the biggest tech stock IPO since Google. It will be interesting to see where things go from here. The good news is that you now have two great choices that will allow your Apple computer to run multiple versions of Windows and Linux, which can save quite a bit of time (switching between computers) and money (additional hardware costs).

UPDATE 1: Randy Stewart just tipped us off to CNET’s performance tests of various virtualization programs on Crave. According to their tests, VMware blows away Parallels. Are there any other tests that you guys know of?

Oh and in my orginal write-up I forgot to mention CrossOver Mac by CodeWeavers, which is another Mac virtualization program. I played around with it a little, but ultimately used Parallels, that is until VMware Fusion was released.

UPDATE 2: Chris Pirillo has posted a video of his comparison between Parallels vs VMware Fusion. Chris says that “idea of ‘switching’ is finally worth seriously considering for those of us dyed-in-the-wool Windows users”.