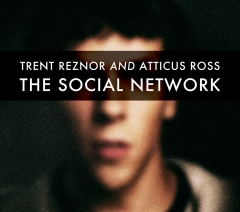 Trent Reznor and Atticus Ross scored the the soundtrack for David Fincher’s new film The Social Network. The album comes out on September 28th and is available for pre-order. You also can download a free 5 track sampler EP now.

The Social Network soundtrack will be released digitally on Tuesday September 28th with physical formats to follow in October. You can pre-order standard CD, Blu-ray (audio only 5.1 surround and high resolution stereo) and 2 disc 180g vinyl formats now. All preorders include an instant 5 song sampler download and a full digital album delivered by email on 9/28. Standalone digital will be available for purchase EXCLUSIVELY on Amazon MP3 at a promotional rate of $2.99 for a 48 hour period starting 12:01am PT on 9/28. Digital purchases will begin here 9/30 at 12:01am PT.