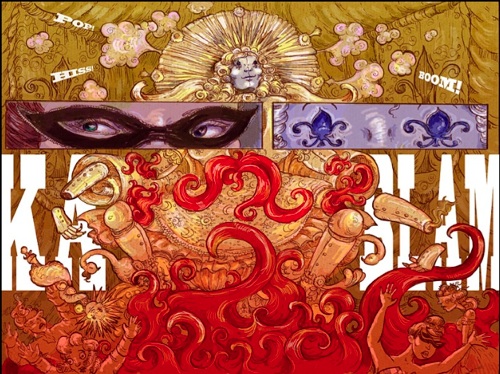 The Puppet Makers is a beautiful new web comic by Molly Crabapple and John Leavitt about a rococo Steampunk murder mystery in Versailles that takes place in 1685. It is being published on DC Comics’ Zuda imprint, with new page added each Wednesday.

Versailles 1685, France has industrialized centuries before her neighbors but focuses on creating exquisitely ornate robotic shells for the aristocracy called, DOLLIES. Towering, lavishly expensive, and run on electricity provided by damming the Seine. Only the court elite wears Dollies, but their upkeep is beginning to bankrupt France. During the king’s birthday party, his Dolly explodes but is found to be empty. Rumors fly, blaming THE SMASHERS, a ring of Luddite terrorists who may lurk within the palace. The church’s cardinal sends a neophyte priest, JEAN JAQUES, to uncover Smashers at court. Amidst the contrary, conniving and self-indulgent upper class, Jean is thwarted at every turn. As he begins to uncover the truth behind the king’s disappearance, he finds that decadence and deceit may be a greater threat to the throne of France and his own life than her missing monarch.

Annalee Newitz recently interviewed Molly Crabapple on i09 about The Puppet Makers.