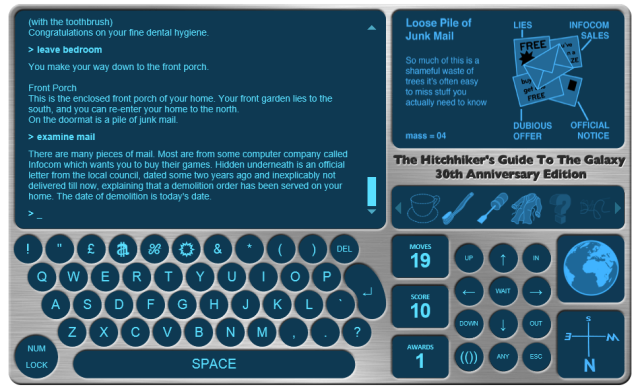 The Hitchhiker’s Guide to the Galaxy interactive fiction video game, programmed by Steve Meretzky of developer Infocom and written by The Hitchhiker’s Guide to the Galaxy novel’s author Douglas Adams, was originally released in 1984 to much acclaim. In 2004, an updated edition created specifically to add a few graphics for the 20th anniversary of the game was put up online by BBC Radio 4. For the 30th anniversary, a brand new edition of the game has been released online.

The 20th anniversary edition’s Flash underbelly has been discarded in favor of using HTML5 in the 30th anniversary, and the update also provides a number of improvements to the user interface. Specifically, the game now includes a larger interface in general with more functionality, and it even allows players to tweet from it. More on the updates to the game is available on BBC Radio 4’s website. The Hitchhiker’s Guide to the Galaxy is currently available to play on BBC Radio 4’s website.