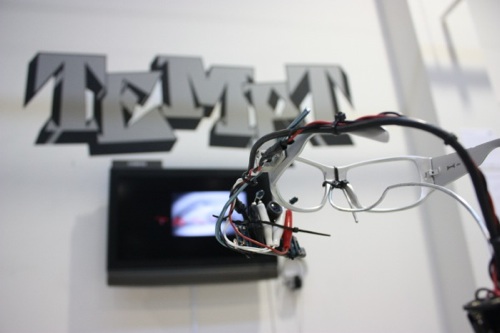 The EyeWriter is an amazing collaborative project that is helping empower people suffering from ALS (Lou Gehrig’s disease), by allowing them to create art using only their eyes. It was orginally developed for Los Angeles graffiti artist Tony Quan aka Temp One, who was diagnosed with ALS in 2003 and who can now makes digital art using The EyeWriter which has been projected on the side of buildings.

Members of Free Art and Technology (FAT), OpenFrameworks, the Graffiti Research Lab, and The Ebeling Group communities have teamed-up with a legendary LA graffiti writer, publisher and activist, named Tony Quan, aka TEMPTONE. Tony was diagnosed with ALS in 2003, a disease which has left him almost completely physically paralyzed… except for his eyes. This international team is working together to create a low-cost, open source eye-tracking system that will allow ALS patients to draw using just their eyes. The long-term goal is to create a professional/social network of software developers, hardware hackers, urban projection artists and ALS patients from around the world who are using local materials and open source research to creatively connect and make eye art.

The Creators Project recently featured artist James Powderly, co-founder of Graffiti Research Lab, who talked about his work various projects, including The EyeWriter.