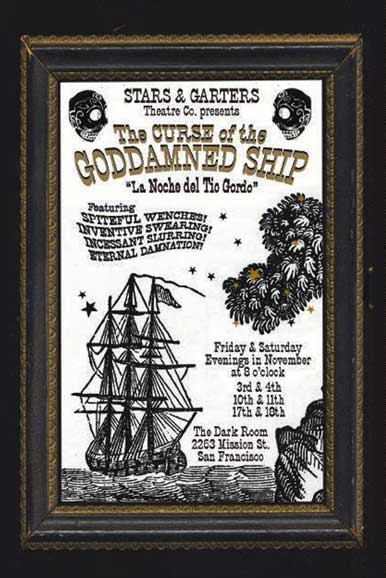 There are two more weekends left of Jenny Jo and Ben Burke’s nautical oddity The Curse of the Goddamned Ship, which takes place at The Dark Room in San Francisco. Tickets are on sale through Brown Paper Tickets.

It is that once-every-hundred-years time again. El Tio Gordo (The Chubby Uncle) is about to set sail.

Join us for an evening of absurd theater, dark comedy, and music of the sea aboard a ship of damned fools:

*Cursed by Neptune due to a desperate constellation heist, the SS Chubby Uncle rises from the bottom of the sea just once every hundred years to fulfill the obligations of said damnation. Behold: a song-filled, nautical tour of the night sky. This is your once-in-a-century chance to board a ghost ship and be ferried about the sparkling constellations by a crew of misfits*

All new constellations. Celebrity understudies. If you missed it in June, (all sold out shows!) don’t miss it again. If you saw it in June, see it again.