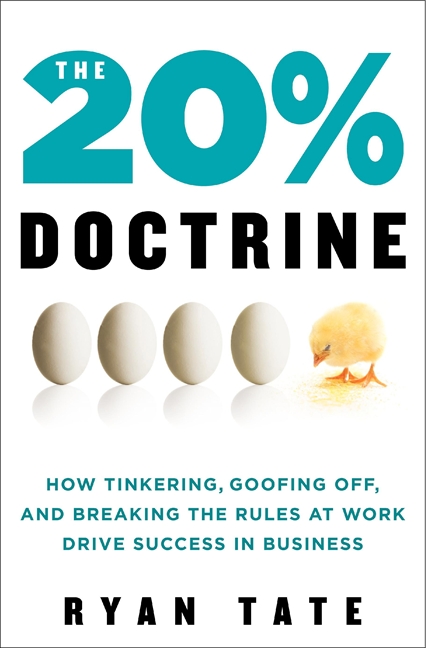 The 20% Doctrine: How Tinkering, Goofing Off, and Breaking the Rules at Work Drive Success in Business is a recently published book that explores the concept of how employees taking a fifth of work time to focus on personal projects can be a good thing. It is authored by Gawker’s tech gossip blogger, Ryan Tate.

We’re at a crossroads. Many iconic American companies have been bailed out or gone bankrupt; others are struggling to survive as digitization and globalization remake their industries. At the same time, the tectonic forces disrupting U.S. corporations—ubiquitous bandwidth and computing power, cheap manufacturing and distribution—have enabled large organizations to foster new innovations and products through experiments that are at once more aggressive and less risky than they would have been twenty years ago. At companies such as Google, employees are encouraged to spend 20% of their work time on projects they’re personally interested in. Almost half of Google’s new product launches have originated from this policy, including Gmail and AdSense. Now other companies have adopted the concept, providing them a path to innovation and profits at a time of peril and uncertainty and offering employees creative freedom when many are feeling restless.

The 20% Doctrine is about goofing off at work, and how that goofing off can drive innovation and profit. Here Ryan Tate examines the origins and implementation of 20% time at Google, then looks at how other organizations such as Flickr, the Huffington Post, and even a school in the Bronx have adapted or reinvented the same overall concept, intentionally and serendipitously. Along the way, he distills a series of common themes and lessons that can help workers initiate successful 20% style projects within their own organizations. Only through a new devotion to the unhinged and the ad hoc can American businesses resume a steady pace of development and profitability.