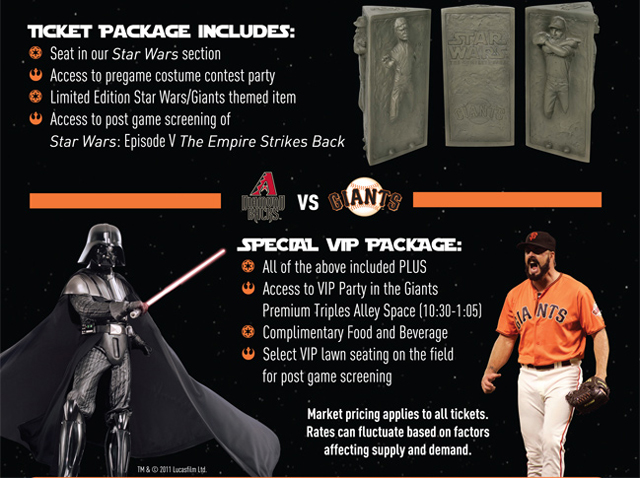 Bay Area fans of both Lucas Films’ Star Wars films and San Francisco Giants baseball will be in for a treat on September 4, 2011 as AT&T Park in San Francisco rolls out the first ever Star Wars Day. In one of the most unique cross-promotion events ever, the day includes a pregame costume contest, an after game viewing of The Empire Strikes Back, and the coolest souvenir ever, “Brian Wilson in Carbonite” statuette.

“Oh, they’ve encased him in carbonite. He should be quite well protected. If he survived the freezing process, that is.”
–C-3PO

The question begs, if Brian Wilson is frozen in carbonite, will his beard survive the freezing process?

The giveaway item included with the Star Wars special event ticket is “Brian Wilson in Carbonite” statue. The statue is three sided, with one side featuring the iconic Han Solo in carbonite pose featured in “The Empire Strikes Back.” A second side features Brian Wilson, in his trademark post-save celebration pose, frozen in carbonite similar to Han. The third side features graphics celebrating the Giants and Star Wars.

Not surprisingly these hot (cold?) little numbers are already being pre-sold on Ebay for $50 and up.

The Giants will play the Arizona Diamondbacks for the actual ballgame, in what will undoubtedly be an interesting day all the way around. Standing Room Only and VIP Triple Alley tickets are still available as of this writing.

The marketing force behind this event really hit one out of the park.