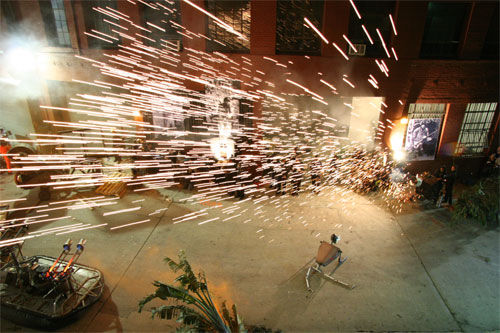 SF IndieFest 2006 is hosting a premiere screening of the Survival Research Laboratories documentary from last April’s SRL show in Los Angeles. This special screening is a benefit for SRL and the money raised will help to offset costs associated with the reloaction of the SRL Shop.

IndieFest will present the public premiere of a version of the Survival Research Laboratories (SRL) documentary of the show that took place in Los Angeles on April 2, 2005. You will be treated to generous demonstrations of flame-throwing! Prepare to witness much manic machine mayhem! Thrill to the destruction of a Trojan Horse! Gaze in wonder at the unrehearsed special guest appearance of the Los Angeles Fire Department! The video shoot was directed by Dave Scardina and edited by Mark Pauline.

After the premiere screening, stick around for a conversation between V. Vale (RE/Search Publications founder), Dave Scardina (the director of the video) and Mark Pauline (founder of Survival Research Laboratories). This will be followed by an audience Q&A session with the panel.